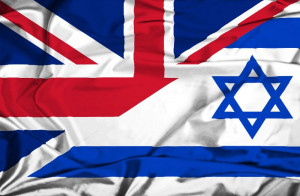 The Minister for Defence People and Veterans, Leo Docherty MP has said the UK can learn “a great deal” from Israel in how to support wounded veterans and praised the charity Beit Halochem, who’s work helped enable the recent Veteran Games in Tel Aviv. Foreign Affairs Select Committee Chairman Tom Tugendhat MP also commended the event and sent a warm message to those veterans competing. It has also been announced that Israel will be invited to compete, for the first time, in the Invictus Games.

The Minister met with British and Israeli ex-servicemen taking part in the games last week, and gave an address at the opening ceremony in Tel Aviv. The games are for former members of the military who have experienced physically or psychological injuries, who compete in swimming, shooting and cross fit, with over 65 veterans taking part during the three-day event.  The charity also organises tours of Jerusalem and Tel Aviv for the veterans and their families and provides the opportunity for them to swim in the Dead Sea.

The games were originally conceived by Ben Halochem’s UK branch and the Minister stated that the games were an example of the “amazingly close” relationship the UK and Israel has developed in defence and intelligence. The minister added that is hard to “see a triple amputee, or a veteran like Amos [who I met] who lost an erm in the Six Day War and not be moved. They’re all heroes”. Docherty pointed to Israel’s work in preparing veterans for civilian life and their “world leading” rehabilitation programs, which should not just be applauded but provide lessons for the UK.

Chair of the Foreign Affairs Select Committee and veteran, Tom Tugendhat MP also praised the event and sent the message: “Over these next few days I hope you’ll make new friendships and that we’ll learn a bit more about the trauma war can cause, how to heal it and how sport can really help.”

Following the Veteran’s Games last week, it has been announced Israel has been invited to take part in the Invictus Games. The games were founded by the British Royal Family and allow wounded veterans to compete in numerous sporting events. It will be the first time Israel has been invited to the games and it is expected that the Israeli Defence Ministry’s Rehabilitation Division and the IDF Disabled Veterans Organisation, will lead Israel’s delegation. The Invictus Games Foundation announced the news with a tweet, stating it was “delighted to welcome Israel to the Invictus Community of Nations.”