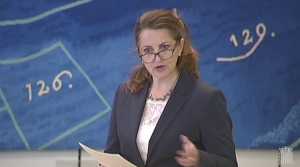 The UK Government this week accepted that a much-anticipated European Union report into the Palestinian school curriculum confirmed that it features “anti-Israel, antisemitic content” and pledged a “zero tolerance” approach, after Conservative MPs raised concerns during a Westminster Hall debate on the EU review into Palestinian textbooks.

The eight MPs condemned condemned extremism in the Palestinian curriculum, questioning the UK’s use of taxpayers’ money to pay the salaries of Palestinian teachers using this material, and called on the Government to instead give greater funding to peaceful coexistence projects. The debate was led by former school teacher and school inspector Caroline Ansell MP.

In her opening remarks, the MP for Eastbourne brought into light examples of the troubling findings cited in the report and called on the Government to take concrete action in holding the Palestinian Authority to account. Ms Ansell underlined: “Nothing will perpetuate this conflict as much as seeding it in generation after generation of children and young people. The report, taken as a whole, is clear: the Palestinian curriculum remains deeply problematic. It is my sincere hope that the UK Government and its international partners will use it, such as it is, as a catalyst for change”.

Responding to the speeches at the end of the debate, FCDO Minister James Duddridge MP acknowledged “it is very clear from the examples used today that there are concerns” with the Palestinian curriculum, stating that “this debate is part of the process, not the end of it”.

He asserted: “There is an acceptance that the report found that there continues to be anti-Israel, antisemitic comment in those textbooks. That clearly is not acceptable to the House or to the Government. The UK Government continue to have zero tolerance for incitement to hatred and antisemitism in all forms”.