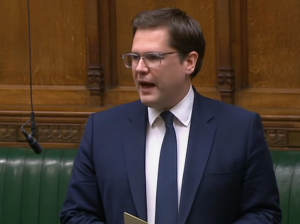 The UK Government has said that “all options” remain on the table in “ensuring that Iran never acquires a nuclear weapon” as the House of Commons unanimously voted on a motion to reflect its “grave concern at the imminent prospect of a nuclear armed Iran”.

Foreign Office Minister Vicky Ford noted yesterday that “Iran’s nuclear programme has never been more advanced than it is today” and is “threatening regional and international peace and security”, in response to a debate led by former Government Minister Rt. Hon. Robert Jenrick MP. He was joined by eight Conservative MPs who raised deep concerns about the revised nuclear deal being negotiated with Iran and called for the UK to proscribe the Islamic Revolutionary Guard Corps as a terror group.

The Minister said that extension of the sunset clauses and a “stricter monitoring regime” were a UK “priority”, but “should the JCPOA collapse, we will consider all options in partnership with our allies”, including new sanctions.

Leading the debate, Rt. Hon. Robert Jenrick, former Secretary of State for Housing, Communities and Local Government, observed that the House had unanimously expressed “grave concern” about the Government “enter[ing] into an agreement that did not have extended sunset provisions or greater enforcement provisions or that permitted the de-proscribing of terrorist-supporting organisations such as the IRGC”.

Jenrick said that Iran “stands on the verge of possessing a nuclear bomb” and that the “JCPOA’s time has been and gone; the Rubicon has been crossed” as a result of its escalating nuclear activities. He expressed concern that “we now see before us the contours of a shorter and weaker agreement – one that many have taken to dismissing as JCPOA-minus”, following “painful concessions” made by the P5+1 negotiators.

Highlighting the “structural failures” within the original JCPOA, Jenrick observed that “Iran has reached the nuclear threshold under the watchful eye of what was supposed to be the most intrusive inspection regime ever”.

“Reports from the previous round of negotiation that the Biden Administration was considering delisting the IRGC”, would be a “grave miscalculation”. Jenrick said that if the UK made the “perverse and absurd” decision to support such a U.S. delisting, it would “make a mockery of the efforts that we [the UK] have made in recent years to proscribe Hamas and Hezbollah” because it is “the very organisation that funds Hamas and Hezbollah”.

Former Middle East Minister Dr Andrew Murrison MP stressed the need for a “stronger, longer deal”, adding: “with every day that passes, the JCPOA becomes less attractive…it is comatose”. He recalled a visit to Tehran in June 2019 as Minister to “remonstrate at its malign regional activities and to insist that it meet its JCPOA commitments, including the limits imposed on its enriched uranium stockpile. In hindsight, it was probably not the best use of my time”.

Bob Blackman MP said the UK, U.S. and E3 “must abandon their flawed approach to the nuclear deal” and “refer the regime’s nuclear dossier to the UN Security Council and reinstate previous UN Security Council resolutions”. He also urged the UK Government to proscribe the IRGC terror group, questioning: “how many more terrorists must the Islamic Revolutionary Guard Corps fund, how many more innocents must die, and how many more must it kidnap before we finally proscribe it as a terror organisation?”

Gareth Davies MP reflected on the threat to Israel: “Iran has made clear its views on Israel’s mere existence and, obviously, a direct nuclear attack on Israel would become a real possibility. A nuclear-armed Iran would also be emboldened to increase its support for terrorist groups such as Hezbollah and Hamas”.

Matthew Offord MP said: “It is almost unthinkable that the world’s greatest sponsor of state terrorism could be on the nuclear threshold, but that is the reality… The great risk is that, in the absence of an ambitious, broad and punitive nuclear framework, Iran will become a nuclear-armed state in a matter of years—perhaps just three. Buying time is not a viable strategy”.

David Jones MP said: “Iran must learn that flouting the JCPOA has real consequences, and the West should unite to apply the most intense pressure possible on Iran to wind up its nuclear programme, since it is now abundantly clear that it is not for any peaceful purpose, but is aggressive. Quite simply, Iran is a rogue state, and a rogue state in possession of nuclear weapons is not a prospect that the West can happily contemplate or, indeed, tolerate”.

The House of Commons adopted a motion at the end of the debate: “That this House expresses grave concern at the imminent prospect of a nuclear armed Iran; calls on the Government in its ongoing negotiations in respect of the Joint Comprehensive Plan of Action (JCPoA) agreement to seek to extend the sunset clauses, enact a stricter monitoring regime, retain terrorist proscriptions, and expand its scope to include Iran’s other destabilising activities in the region”.