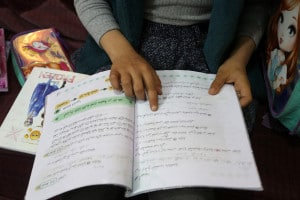 Palestinian Authority textbooks contain material encouraging violence against Israelis and include antisemitic messages, according to an unpublished report commissioned by the European Union in 2019, the Jerusalem Post revealed this week.

The European Commission had not published the report after receiving it from the Georg Eckert Institute for International Textbook Research earlier this year. The EU directly funds the salaries of teachers and the publishers of textbooks, which, the report indicates, encourage and glorify violence against Israelis and Jews.

Excerpts from the report were published in German newspaper Bild earlier this week, after being leaked.

The report’s executive summary glosses over the many examples of antisemitism and incitement in the textbooks, claiming that they “adhere to UNESCO standards” though they “express a narrative of resistance within the context of the Israeli-Palestinian conflict and they display an antagonism towards Israel”. However, the report includes dozens of examples of encouragement of violence and demonisation of Israel and of Jews, JPost writes.

An exercise in one religious studies textbook asks students to discuss the “repeated attempts by the Jews to kill the prophet” Muhammad and asks who are “other enemies of Islam”.

The concept of “resistance” is a recurring theme in the textbooks studied, along with calls for the Palestinians to be liberated via a revolution; one textbook has a photo with the caption “Palestinian revolutionaries” featuring five masked men toting machine guns. One textbook promotes a conspiracy theory that Israel removed the original stones of ancient sites in Jerusalem and replaced them with ones bearing “Zionist drawings and shapes”.

The report found glorification and praise of terrorists who killed Israeli civilians in history, social studies books, science and maths books. The European Commission said that it “takes this study seriously and will act on its findings as appropriate, with a view to bring about the full adherence to UNESCO standards in all Palestinian education materials”.