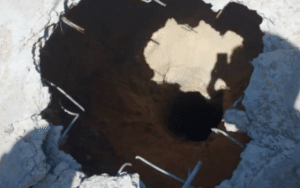 The United Nations Relief and Works Agency (UNRWA) has condemned the construction of a Hamas attack tunnel under a school it operates in the central Gaza Strip, which was apparently targeted by the Israel Defense Forces during last month’s 11-day conflict between Israel and the Hamas terror group.

At the end of May, UNRWA found what “appears to be a cavity and a possible tunnel, at the location of the missile strike. “The depth of the cavity is approximately 7.5 metres below the surface of the school. UNRWA discovered the existence of a possible tunnel in the context of the investigation of the fired missile”.

Despite the building under the school, there is no “indication of the existence of any entry or exit points for the tunnel within the premises”.

Yesterday, photos of the tunnel were published by Israeli TV channel Kan news. The photos showed a tunnel shaft roughly seven metres below the surface.

In 2017, the UN agency also said it had found a Hamas tunnel dug underneath one of its schools.