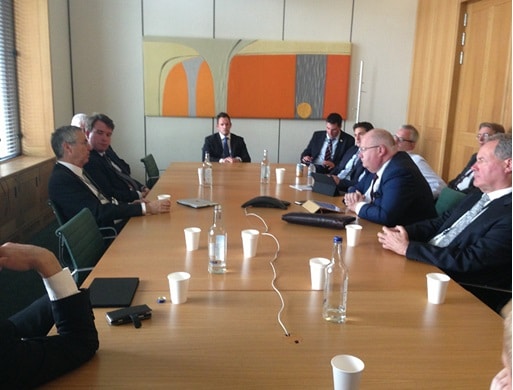 12 Conservative MPs attended a CFI briefing event in Parliament with Brig. Gen. Michael Herzog on Wednesday. The briefing was chaired by CFI Parliamentary Chairman, Rt. Hon. Sir Eric Pickles MP, and amongst the MPs to attend were 9 who were newly elected to Parliament.

Gen. Herzog spoke mainly on Iran and the looming deadline for a deal with the P5+1 on the country’s nuclear programme. He also discussed a range of other issues and answered questions from MPs on subjects as far-ranging as the Middle East Peace Process, the rise of extremism in the region, and Turkish-Israeli relations.

Gen. Herzog asserted that the deal would legitimise Iran as a nuclear threshold state and could precipitate a “dangerous nuclear cascade in the region”, spurring powers such as Saudi Arabia to seek nuclear weapons.

He warned that the deal may empower the regime and Ayatollah Khamenei rather than moderates in the country, and that once sanctions were lifted on the country they would be very difficult to reimpose.

IAEA inspections of Iran’s nuclear plants, monitoring, and a deterrence were critical to block all pathways to Iran obtaining a nuclear bomb, Herzog said.

Gen. Herzog also highlighted that there was an increasing convergence of interests between Israel and other Arab nations, including Egypt, Jordan and some of the Gulf states.