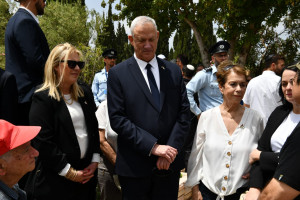 Yom HaZikaron, Israel’s Day of Remembrance, occurred from Tuesday evening to Wednesday evening this week. All over Israel on Wednesday, a siren was sounded at 11am to mark the opening of official memorial ceremonies, and private remembrance gatherings, at cemeteries where soldiers are buried. At the sound of the siren Israelis stopped everything, including driving and stood for a minute’s silence. This year Israelis united to remember the loss of 24,068 fallen soldiers and 4,217 civilians who were killed in terrorist attacks against Israel.

Israeli’s and Jewish Communities around the diaspora joined in memorial services, including a service held by Amir Hayek, the Israeli Ambassador to the UAE, in Abu Dhabi which was the first official Memorial Day ceremony to be held in an Arab state.

Israel’s Deputy Prime Minister, former Minister of Defence and retired Army General, Benny Gantz shared his thoughts on Twitter, stating that “as Israel’s Memorial Day siren fills the air, I try to remember every name. The list grows longer every year, but the siren’s length remains. I remember my commanders, my soldiers and my friends who fell so that in 24 hours’ time we can celebrate our independence once again”.

He went on to explain that he carries the memory of Israel’s fallen heroes and knows that Israel must do everything in its power to protect the nation and to prevent further loss.

Gantz’s comments come during the resurgence the most recent wave of terror, which saw 16 people killed since 21st March and Yom HaZikaron 2022.