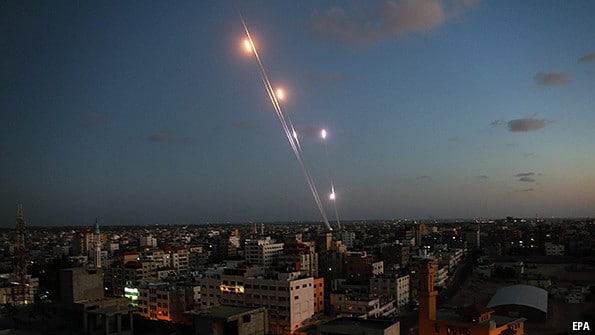 In a report due to be published on Thursday, Amnesty International has accused Hamas and other Gaza-based terror groups of committing war crimes by indiscriminately firing rockets at Israeli civilians during last summer’s 50-day Operation Protective Edge conflict.

“In launching these attacks, they displayed a flagrant disregard for international humanitarian law and for the consequences of their violations on civilians in both Israel and the Gaza Strip,” Luther said.

Thursday’s 63-page report entitled “Unlawful and Deadly: rocket and mortar attacks by Palestinian armed groups during the 2014 Gaza/Israel conflict”, is the first publication from the human rights organisation that focuses specifically on Palestinian rocket fire from Gaza.

It confirms Israeli allegations that Gaza-based terror groups had fired many rockets from civilian areas, stating that such rocket launchings were “far from isolated incidents”.

The report states: “There are credible reports that, in certain cases, Palestinian armed groups launched rockets or mortars from within civilian facilities or compounds, including schools, at least one hospital, and a Greek Orthodox church in Gaza City”.

According to the report, 13 Palestinian civilians were killed when a Palestinian projectile launched from the Gaza Strip apparently landed in a Gaza refugee camp. Palestinians have claimed that the Israeli military was responsible for that attack, but Amnesty International said an independent munitions expert examining the evidence on the group’s behalf concluded that a Palestinian rocket was responsible.

The report quotes one resident of the al-Karama neighborhood in Gaza City, who described rocket launchings by terror groups near homes on 21st July 2014. “That day, while I was resting, two Kassam rockets were fired from the right and left of the house, at the same time that the missiles from the plane hit us”.

Gaza-based terror groups fired 4,881 rockets and 1,753 mortars at Israel between July 8 and August 26, 2014. At least 243 were intercepted by Israel’s Iron Dome missile defence system, while another 31 fell short and landed within the Gaza Strip.

The Israeli Embassy in London has welcomed the report highlighting war crimes by Hamas, and stated: “Unlike Hamas, Israel is vigorously investigating its conduct, aiming to draw lessons and minimize civilian harm. Meanwhile, Hamas continues to incite terrorist attacks against Israeli civilians, boast of building new cross-border assault tunnels, and test-fires rockets, in preparation for further violence against Israelis”.