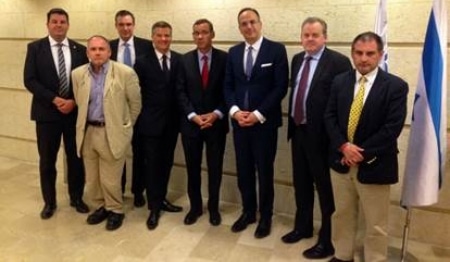 During the recent Easter Recess, CFI were accompanied by seven MPs to Israel for a tailored delegation about Iran. The group received a series of in-depth briefings from senior Israeli officials and experts on issues as wide ranging as Iran’s nuclear programme, support for terrorism and human rights abuses.

The focus of the trip was the status of Iran’s nuclear activities and the on-going P5+1-Iran nuclear talks within the framework of last November’s interim nuclear agreement; the Joint Plan of Action.

The group learned about the specifics of the Joint Plan of Action and Iran’s domestic political scene in meetings with Emily Landau, Head of the Arms Control and Regional Security programme at Israel’s renowned Institute for National Security Studies (INSS) and respected Iranian-born Israeli academic, David Menashri, founding Director of the Alliance Centre for Iranian Studies at Tel Aviv University. Additionally, the visit featured a dinner with British Ambassador to Israel, H.E. Matthew Gould at his Residency in Tel Aviv.

Conservative MPs have repeatedly raised concerns with the Foreign Secretary about Iran and the Joint Plan of Action interim agreement. Earlier this year, Matthew Offord MP led a Westminster Hall Debate on the Joint Plan of Action, in which he stated his “serious concerns” about the interim agreement, and noting that it “does not resolve international suspicions”, while granting Iran an easing of economic sanctions.