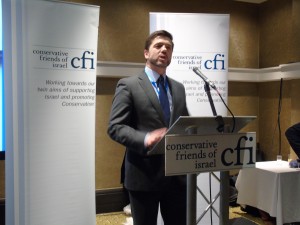 Today, CFI announced that former Cabinet minister Rt. Hon. Stephen Crabb MP will be our new Parliamentary Chairman in the House of Commons.

CFI has also confirmed its new Vice-Chairmen and Officers.

This leading group of parliamentarians, who come from all corners of Britain, will include:

Rt. Hon. Stephen Crabb MP said: “I’m excited and honoured to become CFI’s new Parliamentary Chairman in the House of Commons, particularly in this special Balfour centenary year. The UK-Israel relationship is stronger than ever, and CFI plays an important role in this. I am very much looking forward to building on the great work of my predecessors and strengthening the UK-Israeli bilateral relationship”.

CFI Honorary President Lord Polak CBE and CFI Executive Director James Gurd said: “The CFI Directors and Professional Team are delighted to have such a popular and respected figure to serve as CFI’s Parliamentary Chairman in the House of Commons. Stephen has been a long-standing friend of Israel, as evidenced by his memorable Yom Ha’atzmaut speech at Finchley Synagogue last year. With a strong new team of Vice-Chairmen and Officers who represent all corners of the United Kingdom, CFI is well-positioned to further strengthen the UK-Israel relationship during this Parliament”.