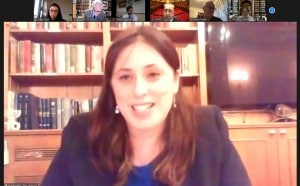 CFI this week hosted a Zoom meeting with the new Ambassador of Israel, H.E. Tzipi Hotovely, which was attended by over 80 Conservative MPs, peers and supporters.

Participants heard from the Ambassador about how she is settling in to the UK and her plans for whilst she is here.

Ambassador Hotovely celebrated the UK-Israel partnership, spoke about the emergence of peace deals in the region and the threat from Iran.