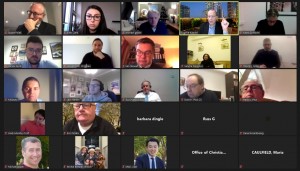 Parliamentarians heard about Israel’s high-tech success in dozens of industries including cyber security, agritech and digital healthcare, learning that there is one innovative company for every 1,300 people.

Professor Kandel noted the potential for collaboration between Israel and the UK, as well as Israel and its new Gulf partners including the United Arab Emirates (UAE), in areas such as research and development and commercial investment.