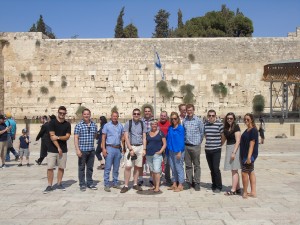 Speaking in an interview with the Times of Israel, Chief Whip John Lamont MSP, said, as a result of the trip, his colleagues had “a much greater understanding and feel for the issues,” surrounding the Middle East conflict.

He underlined: “We’re keen to ensure that people know that Scotland and the United Kingdom are still looking for business. We’re keen to use the Brexit result as an opportunity to build closer ties with Israel”.

The visit received a high-level of press coverage, with articles published in the Times of Israel, Haaretz, Jewish News, Jewish Chronicle, the Jewish Telegraph, and the Evening Express.

As a result of the trip, the Scottish MSPs pledged to lobby for direct passenger flights between Scotland and Israel in a bid to strengthen ties between the two countries.

The CFI delegation featured a full itinerary of political and security briefings, giving the group a first-hand look at the latest situation in Israel. The central mission of the trip was to promote bilateral trade between the two countries and bolster the growing pro-Israel advocacy movement in Scotland.

On their first day in the country, the delegates had dinner with Britain’s Ambassador to Israel, H.E. David Quarrey, at his residence in Tel Aviv, who gave an introduction to some of the key issues faced by Israel currently.

The group had lunch with the Israel-UK Chamber of Commerce, to learn about the flourishing ties and bilateral trade between the two countries, and later visited the Elevator Fund, a start-up fund located in the heart of Tel Aviv’s thriving business hub.

As part of the diverse itinerary, the Scottish Conservatives received security briefings on Israel’s northern border with Lebanon where Hezbollah is reported to have embedded an estimated 100,000 rockets into Shiite villages close to the border. The delegation then travelled to the Golan Heights and Israel’s border with Syria, overlooking the turmoil of the civil war.

In Holon, the delegation visited Save a Child’s Heart where they met children from around the world receiving life-saving heart surgery, including a newborn baby from Afghanistan.

In Jerusalem, the delegates were given a tour of Israel’s Parliament, the Knesset, and met with Knesset Members (MKs) from parties across Israel’s political spectrum. The group had the opportunity to meet with Benny Begin MK, from Prime Minister Benjamin Netanyahu’s party Likud, Ksenia Svetlova MK, from the left-wing Zionist Union, and Ya’akov Margi MK, from the ultra-Orthodox Sephardic party Shas.

On the final day of the trip, the delegation paid a moving visit to Yad Vashem Holocaust Memorial in Jerusalem and laid a wreath on behalf of the Scottish Conservatives.

During the entirety of the visit, the group also saw numerous cultural, historical, and religious sites in Israel, including a tour of Jerusalem’s Old City, and the Mount of Beatitudes in Capernaum, Galilee.