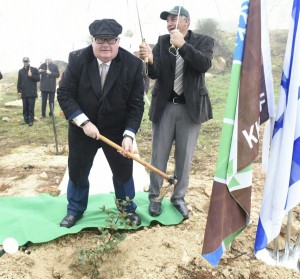 CFI Parliamentary Chairman, Rt. Hon. Sir Eric Pickles MP, planted a tree at Yad Kennedy Memorial in the Aminadav Forest in Jerusalem on Wednesday, in honour of his knighthood.

Sir Eric described the dedication of trees as “a particular honour for me”, and expressed his joy at “putting down roots in this wonderful country; a bastion of democracy”. He thanked CFI and the Jewish National Fund (JNF), stating that he was “genuinely emotionally pleased to have this gift”.

The former Communities and Local Government Secretary said that he “first came to Israel in 1980 and fell in love with the place and its people”. He said that “it has been a real pleasure playing a small part in bringing our two great countries together”, describing the relationship between the UK and Israel as “an absolutely wonderful thing”.

On receiving his knighthood in February last year, CFI presented Sir Eric with a certificate stating that in his honour, a garden of trees will be planted by the JNF in Jerusalem.

The ceremony follows the Jewish holiday of Tu BiShvat, which took place last weekend. The festival celebrates the ‘New Year of the Trees’, and trees are traditionally planted in celebration.

During the CFI delegation, parliamentarians have met with a series of Israeli and Palestinian politicians, and have visited Israeli charities Save a Child’s Heart and Beit Issie Shapiro.

Following the tree planting ceremony, Rt. Hon. Sir Eric Pickles MP said: “Today’s tree planting has been a particular honour for me. I first came to Israel in 1980 and fell in love with the place and its people. It’s wonderful to put down roots in this wonderful country; a bastion of democracy. It’s been a real pleasure playing a small part bringing our two great countries together. Thank you very much to CFI for this honour and the JNF for arranging such a memorable occasion”.