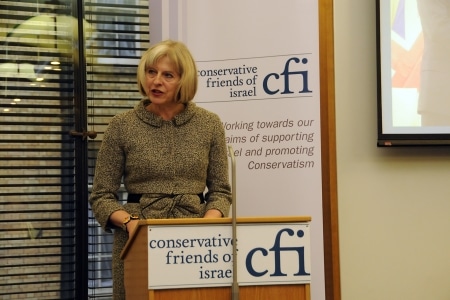 Home Secretary, Rt. Hon. Theresa May MP addressed attendees in a speech staunchly supportive of Israel, asserting: “I – and the whole British Government – will always defend Israel’s right to defend itself.”

"It is worth re-stating the threats faced by Israel because they are considerable. There are the familiar but deadly threats from Hamas and Hezbollah. The collapse of Syria that has spawned ISIS and threatens to destabilise Lebanon and Jordan. The instability of the wider region. And the threats issued to Israel by Iran. No democratic government could, in the face of such danger, do anything but maintain a strong defence and security capability and be prepared to deploy it if necessary. That is why I – and the whole British Government – will always defend Israel’s right to defend itself."

"When Israel faces the full range of threats I have just listed, when Israel faces enemies that are intent on its very destruction, when Hamas uses Palestinian civilians as human shields for its rockets, when there are thousands of Israeli settlers living in the West Bank, it is easy to talk about a two-state solution but almost impossible to know how to move towards one."