The two Conservative Party leadership candidates have written special letters to CFI’s supporters outlining their views on Israel and plans to support the Jewish community in the UK.

In his letter, Foreign Secretary Jeremy Hunt said that he was a “strong supporter” of CFI, underlining that “the ongoing relationship between our two countries is incredibly important”.

Mr Hunt praised the UK-Israel friendship which he said is “based on a historic admiration for what the country has achieved against all the odds”. He wrote: “Despite the challenges of geography, history, and threats to its very existence, Israel has thrived as a modern, prosperous, high-tech country”.

The Foreign Secretary welcomed the “closeness of our two countries”, stating: “I look forward to engaging with Israel to negotiate a free trade agreement following Britain’s exit from the European Union later this year… I hope and expect we will be able to agree this very soon”.

He added that “Israel and the UK have major roles to play in a safe and secure world”, and “both Democracy and democratic values cannot be taken for granted”.

Expressing his “deep concern” about rising levels of antisemitism in the UK, the Foreign Secretary emphasised that “it is crucial we put a stop to it”.

In his letter, Boris Johnson declared his “deep admiration for CFl”, stating that “our relationship with Israel makes us Brits safer and more prosperous”.

He said: “From the record bilateral trade and close cooperation of our security services to Israeli medical equipment and software used daily by Brits, we are better off standing shoulder to shoulder”. He emphasised his “fundamental belief” that “the world is safer with the British-Israeli alliance intact and empowered”.

Mr Johnson said he admires “the courage, determination and robustness of the Israeli state, the only true democracy in the region”. He added that he has always considered himself to be “a true friend of Israel” stating that his 2015 trip to the country as Mayor of London is among his “fondest memories”.

Reflecting on his recent term as Foreign Secretary, Mr Johnson said that without his input, last year’s unprecedented Royal visit to Israel “would have been different or potentially not undertaken at all”.

Mr Johnson said that as Mayor of London, he “refused to bend to calls for boycott on Israeli goods”, assuring CFI supporters that he will “continue to refuse to bend to the whims of racists or antisemites”.

He made clear that he views the “construction of a National Memorial to the Holocaust and a Learning Centre next door to Parliament as a shared national responsibility”.

The letters follow CFI’s husting events with both of the leadership contenders over the last fortnight. 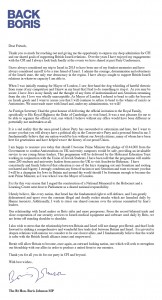 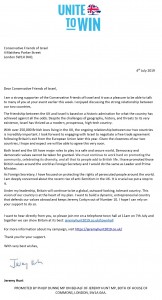