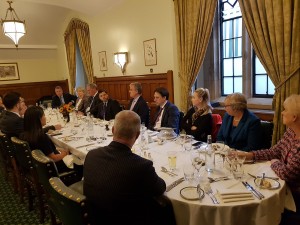 The parliamentarians were briefed by the President of OurCrowd, Andy Davies, who explained how Israel’s high-tech ecosystem has excelled in recent years, before responding to questions raised by attendees during a question and answer session.

Chairing the event, CFI’s Parliamentary Chairman in the House of Commons, Rt Hon Stephen Crabb MP, highlighted that a group of Conservative MPs had visited Israel on a trade-focused delegation earlier this year.

Israel has the highest density of start-ups in the world, and receives around 20% of foreign investment into technology. The country’s unique ecosystem of innovation consists of collaboration between the army, academia, the government, private funding, start-ups, and multi-national corporations.