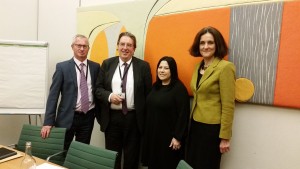 A number of Conservative parliamentarians this week attended a CFI briefing event with Sarri Singer,  terror victim and Director of Strength to Strength, an NGO focusing on bringing victims of terrorism worldwide together.

The briefing, which was chaired by John Howell OBE MP, provided an opportunity for parliamentarians to hear Ms Singer’s moving story, and ask questions about the challenges she faced and continues to face regarding terror in Israel and in the United States, along with her work with terror victims in the UK.

Parliamentarians heard that on June 11, 2003, Ms Singer was on Bus 14 in Jerusalem when an 18-year-old Palestinian terrorist dressed as a religious Jew boarded and blew himself up. 16 people were killed, including all those seated and standing around her, and over 100 people were injured. Ms Singer was hospitalised for two weeks and then returned to New Jersey to be with family.

Following the attack, she founded Strength to Stength, an NGO which focuses on bringing together victims of terrorism together from around the world and assisting with long term psychological needs.

She underlined to MPs how important it was that victims of terrorism have a voice, and that her organisation aimed to provide that.

Ms Singer stressed that there needs to be far more oversight on the financing of terror; from banks and governments around the world. She said that government officials should increase transparency in aid spending, and that NGOs must ensure aid reaches the most needy rather than being misappropriated by terror groups such as Hamas. She urged the need for both governments and NGOs to do more in these areas in order to “help people rather than perpetuating terrorism”.

Ms Singer said that lessons could be learnt from how carefully banks applied restrictions on Iran while the sanctions regime was imposed.

Ms Singer has spoken before members of Congress in Washington D.C., politicians in New York and New Jersey, appeared on CNN, Fox News, and many more audiences.