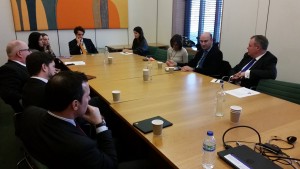 Dr Bermant spoke to MPs about his new book, which is an appraisal of former Prime Minister Margaret Thatcher’s Middle East policy.

He emphasised that Lady Thatcher, who was the MP for Finchley, had a close relationship with the Chief Rabbi, and was consistent in her strong personal support for the State of Israel. Dr Bermant spoke about the UK Government’s policy on the country during her time as Prime Minister.

MPs asked questions on the impact of Brexit on EU-Israel relations, the Iran deal, and the support of Israel in the Conservative Party during Thatcher’s years as Prime Minister.