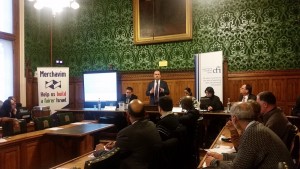 The event involved a lively discussion about shared citizenship in Israel, and Merchavim’s work to support Israel’s multi-ethnic and multi-religious democracy by providing equal access to education as well as promoting better community relations.

Merchavim is an Israeli NGO which educates young Israelis of all backgrounds to build a shared future by learning about their fellow citizens, appreciating the diversity of Israeli society and working together to make their classrooms, schools and communities fairer for the benefit of all.

British Friends of Merchavim Chair Errol Rudnick introduced the speakers Abeer Halabi, Elisheva Darar, and Roi Maor who spoke about life in Israel and Merchavim’s work from their own perspectives, belonging to the Druze Arab, Ethiopian Jewish, and secular Jewish groups respectively.

Abeer Halabi told the group that there had been positive progress in building a robust civil society in recent years, due to “move convergence amongst different communities”. However, she said “at the same time there are more extreme voices within communities”.

The audience were told about one of the NGO’s key programmes to work with the Ministry of Education through a joint initiative to integrate 500 unemployed Arab teachers in Jewish schools. Over the past decade, the NGO has trained 3,000 educators.

Following the briefing of Merchavim’s work, MPs and supporters had the opportunity to ask questions.