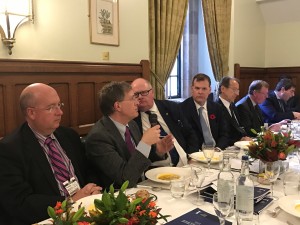 Eight Conservative parliamentarians attended a cross-party parliamentary lunch hosted by the Friends of Israel Initiative (FOII) this week to launch the latest publication in the FOII’s Strategic Outlook Series.

The theme of the discussion was “The New Middle East: Regional Alliances, Western Interests and the Future of Israel Amidst the New-Old Chaos”.

The speakers addressed parliamentarians on a range of issues affecting Israel, including Iran’s nuclear programme and Hezbollah.

Among those to attend from the Labour Party included Lord Turnberg.