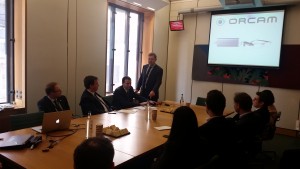 Today in Parliament, Conservative MPs attended a briefing with Israeli company OrCam to learn about the ground-breaking technological device it has invented to help the blind and visually impaired.

At the briefing, MPs were given a presentation by OrCam CEO Ziv Aviram, before a Q&A session chaired by Craig Williams, the MP for Cardiff North, and an opportunity to try out the product.

Among those present were Matthew Offord MP and Edward Argar MP, who described the device as “absolutely fascinating”.

The OrCam MyEye device has a smart camera and attaches to eyeglasses and recognises text, products and faces, speaking to the user through an earpiece.

The intuitive device responds to a point of the user’s finger or the press of a button, reading aloud printed text, including on a computer or smartphone.

The device recognises known faces (the user can store faces), identifying and announcing the person’s name upon entering the camera’s view.

The technology – developed in Israel – is the first of its kind, enabling the visually impaired and blind to carry out new tasks they were previously unable to perform.