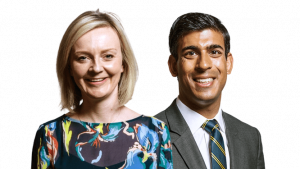 Rt. Hon. Rishi Sunak MP and Rt. Hon. Liz Truss MP have written exclusive letters to CFI and our dedicated supporters outlining their past, present and future support for Israel and the UK Jewish community.

The letters come ahead of CFI’s series of hustings events with the two leadership candidates, which are taking place over the next 10 days. For full details and to RSVP please see the bottom of this article. 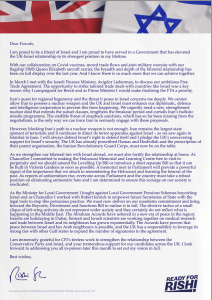 Both candidates have stated that as Prime Minister they will continue to grow the UK-Israel relationship, with Rt. Hon. Liz Truss MP stating: “I pledge to renew my commitment to CFI and the UK’s Jewish community…not just because of CFI’s support, but because it is the right thing to do”. Rt. Hon. Rishi Sunak MP said that he was “proud to be a friend of Israel and…to have served in a Government that has elevated the UK-Israel relationship to its strongest position in my lifetime”, adding that he knows “there is so much more that we can achieve together”.

Both candidates pledged to counter Iran’s destabilising activities, secure a UK-Israel Free Trade Agreement, and honour the 2019 Conservative Manifesto commitment to combat BDS with legislation. They also committed to combating antisemitism and supported the construction of the UK’s National Holocaust Memorial and Learning Centre.

On the topic of the UK-Israel relationship, the former-Chancellor reflected on his meeting with Israeli Finance Minister Avigdor Lieberman earlier this year, and expressed that if he was elected, he would “make finalising the Free Trade Agreement a priority”.

Foreign Secretary Truss said that she is “look[ing] forward to deepening our connection through a Free Trade Agreement which cements our relationship with Israel”, adding that “the UK would benefit greatly from closer trade with Israel”. She also expressed that it was “a great honour” to work alongside Israeli Foreign Secretary Yair Lapid to “renew the UK’s commitment to Israel through a new UK-Israel Strategic Partnership”, and added that “the UK should stand side by side with Israel, now and well into the future. As Prime Minister, I would be at the forefront of this mission”.

Mrs Truss pledged that as Prime Minister she would continue to build on her record of combatting anti-Israel bias as the United Nations and other international fora – including the UN’s controversial commission of inquiry. She also recognised the “importance and sensitivity of the location of the British Embassy” and vowed to “review a move to ensure we are operating on the strongest footing with Israel”.

Speaking about her commitment to Israel’s safety and security, which is of “upmost importance”, Ms Truss reiterated her statement at the CFI Conservative Party Conference reception in 2019 that she “remain[s] committed to standing up to Iranian hostility and their pursuit of nuclear weapons”.

Mr Sunak wrote that he is “deeply” concerned by Iran’s threat to Israel, outlining that he “will always defend Israel’s right to defend itself and I pledge the UK’s unwavering support for Israel’s security”. He went on to state that “we cannot allow Iran to possess a nuclear weapon” and added that “proscription of… [the Islamic Revolutionary Guard Corps]… must now be on the table”. 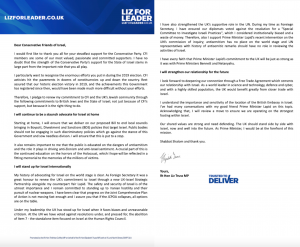 Both wrote about the importance of reducing antisemitism in the UK. Rt. Hon. Liz Truss MP stated that it “remains important to me that the public is educated on the dangers of antisemitism and the role it plays in driving anti-Zionism and anti-Israel sentiment”, adding that the new National Holocaust Memorial will be “crucial” to this.

Rt. Hon. Rishi Sunak MP expressed that along with “strengthen[ing] our bilateral ties with Israel abroad, we must also fortify the relationship at home”. He added that he had previously personally “committed to making the Holocaust Memorial and Learning Centre free to visit” and pledged to introduce legislation to ensure it is built in Victoria Gardens ”as soon as possible”.

Both candidates also committed to combatting BDS. Mr Sunak reflected on his past positions in government, explaining that as Local Government Minister he “fought against Local Government Pensions Schemes boycotting Israel and as Chancellor I worked with Robert Jenrick to empower future Secretaries of State with the legal tools to stop this pernicious practice”. He added that the UK government “must now deliver on our manifesto commitment and bring forward the BDS Bill to outlaw it in full”.

The Foreign Secretary wrote that she will “ensure that we deliver on our proposed Bill to end local councils bringing in BDS policies that target Israel”, adding that BDS action by public bodies “sow needless division” by “go[ing] against the stance of this Government”.

Both candidates spoke highly of the role CFI supporters, and CFI as an organisation, have played in the Conservative Party’s relationship with Israel. Rt. Hon. Rishi Sunak MP wrote that he was “immensely grateful for CFI’s tireless work”, and Rt. Hon. Liz Truss MP said she has “no doubt that the strength of the Conservative Party’s support for the State of Israel stems in large part from the important role that you all play”.

Join us at CFI’s upcoming hustings Q&A events with the two candidates.

The location for both events will be revealed once your RSVP is confirmed. Please RSVP to sarit@cfoi.co.uk as soon as possible and state which event you wish to attend. Please note that these hustings are only open to members of the Conservative Party and are non-transferable.

We look forward to seeing you there!