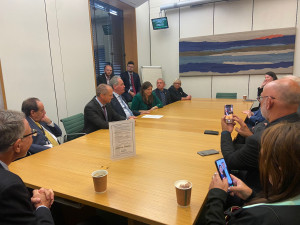 Conservative MP’s and Peers joined a cross-party briefing with Israel’s Minister for Agriculture and Rural Development Oded Forer this week, hosted by the Britain-Israel APPG and chaired by Bob Blackman MP.

Forer called Israel’s agricultural and water production “a miracle out of the desert” and that in its 75 year history Israel had faced and successfully overcome many of the food security issues now facing the world following Russia’s invasion of Ukraine. He spoke of how Israel was now assisting its neighbours to tackle their own food security issues, including helping Egypt to develop wheat varieties capable of surviving climate change snd generating higher yields.

Forer’s briefing was a chance for MPs to learn how the UK-Israel partnership could be strengthened in areas related to food production and agricultural self-sufficiency. Among ideas discussed was the creation of a joint research grant between the UK and Israel, which would bring UK-Israeli universities and research institutions together in areas of common interest.

Also discussed was the Volcani Centre, Israel’s premier agricultural research centre, which received the UNESCO-Equatorial Guinea International Prize for Research in the Life Sciences in 2017.