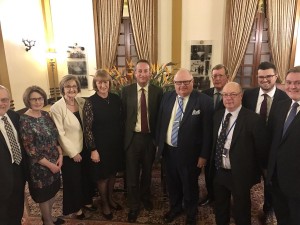 In December, five Conservative parliamentarians participated in the annual Australia Israel UK Leadership Dialogue, bringing together legislators, business leaders and opinion formers from across the political spectrum from the UK, Australia and Israel.

Among those to attend in the Australian delegation were over eight MPs, including former Prime Minister Tony Abbott, as well as leading Australian journalists.

The Dialogue gave the parliamentarians the opportunity to explore issues of mutual strategic interest and to encounter first-hand a range of views about them.

During their visit, the delegates met with a range of NGOs and businesses, including Palestinian Media Watch’s Director Itamar Marcus, Israeli humanitarian aid agency IsraAID, and the Mayor of Jerusalem, Nir Barkat.

The group also met with Chaguy Tzuriel, the Director General of Israel’s Ministry of Intelligence.

The itinerary also featured a day of discussion in the Knesset on a range of issues including Iran, Brexit, and the U.S.

In addition, the delegates were given tours of Jerusalem’s Old City, Masada, and the Dead Sea.

Commenting on the visit, CFI’s Parliamentary Chairman, Rt. Hon. Sir Eric Pickles MP said: “I am delighted to be back in Jerusalem with so many friends to participate in my second Australia Israel UK Leadership Dialogue. This year has been filled with unprecedented political events, from the UK’s dramatic vote to leave the European Union and Theresa May taking over from David Cameron at No.10 Downing Street, through to the nail-biting Australian federal election and the surprise election of Donald Trump. Each of these seismic developments will stand to have a significant impact on Israel, but I have no doubt that each of our great countries will deepen their ties with the Jewish State and Israel will be all the stronger for it”.