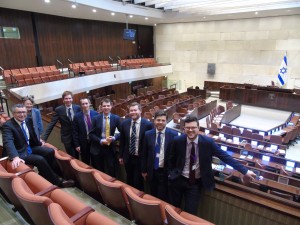 On a visit to Israel’s southern border with Gaza, delegates received a strategic briefing from the Israel Defense Forces (IDF) inside the tunnel, which leads into an agricultural field in an Israeli kibbutz. In the last three months, the IDF has found and destroyed three tunnels from Gaza, constructed by Hamas militants in order to carry out terror incursions into Israel.

Rt. Hon. Stephen Crabb MP said: “My colleagues and I were shocked by the sophisticated tunnel we saw leading into Israel from Gaza. The fact that Hamas terrorists were just metres from an Israeli community is deeply worrying, and exemplifies the threats Israel faces on a daily basis. We in the UK can learn a great deal from Israel in the fight against terrorism, and we must do more to prevent international aid from being misappropriated in Gaza for these despicable activities”.

Watch the i24 News report here.

Conservative MP for East Renfrewshire, Paul Masterton, viewed a United Hatzalah ambucycle dedicated in memory of Yoni Jesner, who lived in the constituency and had attended Belmont House School in Newton Mearns. Yoni Jesner was 19 years old when he was killed in a suicide bombing on a bus in Israel on 19th September 2002. After sustaining a critical head injury in the attack, Yoni was taken off life support and his organs were donated to three people, including a 7-year old Palestinian girl.

CFI Officer Paul Masterton MP said: “My first visit to Israel and the West Bank has been an eye-opening one. Seeing the ambucycle dedicated in my constituent Yoni Jesner’s memory was inspiring. Yoni’s dream to study medicine in order to save lives has truly been fulfilled by the life-saving work medic Avi carries out every day”.

The itinerary featured a series of meetings with senior Israeli and Palestinian politicians, journalists and analysts, as well as high-tech innovators and charities.

In the West Bank, delegates met Bashar al-Masri, the visionary behind the first Palestinian-planned city of Rawabi. They were briefed by Palestinian polling expert Dr Khalil Shikaki on the latest public opinion trends among Israelis and Palestinians before meeting Chief PLO negotiator Saeb Erekat in Ramallah.