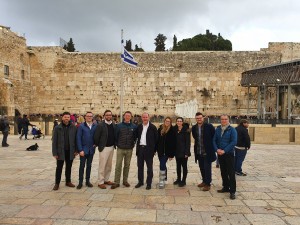 CFI coordinated a delegation to Israel last week with 7 Conservative parliamentarians, many of whom were visiting for the first time.

The itinerary featured a series of high-level meetings with Israeli politicians, journalists, entrepreneurs and academics, as well as strategic briefings and visits to organisations that promote peaceful coexistence. The delegation also travelled to the West Bank, meeting PLO Chief Negotiator Saeb Erekat in Ramallah and visiting the first Palestinian-planned city in Rawabi.
Delegates recorded videos sharing their thoughts on the speakers and sites visited throughout the trip, which can be viewed on CFI’s Twitter account.

The delegation began in the north of Israel, where MPs and Lords were briefed on the security situation on Israel’s northern border with Lebanon where Hezbollah is reported to have embedded an estimated 150,000 rockets into Shiite villages close to the border.

The delegation then travelled to the Golan Heights and Israel’s border with Syria, overlooking the turmoil of the civil war, where they received a strategic briefing from the Israel Defense Forces (IDF) on the Syrian civil war and Iranian proxy Hezbollah’s efforts to open a second front in southwest Syria. At the height of violence, the IDF provided medical treatment to over 4,000 injured Syrians.

At the Golan Heights, CFI Parliamentary Chair Rt. Hon. Stephen Crabb MP said that the terror group Hezbollah’s activities “can only mean bad things for Israel, bad things for the people of Syria as well”.

The following day, the CFI delegation was hosted by the new British Ambassador to Israel, H.E. Neil Wigan OBE, at his residence in Tel Aviv for an informative discussion on the latest regional issues.

In Jaffa, the group visited i24NEWS, an Israeli international news channel broadcasting in French, English and Arabic, where they were briefed on the channel’s progress since its founding in 2013. The group met with Frank Melloul, founder and CEO of the channel.

The delegates tested VR sets and received a briefing on Israel’s innovation ecosystem from Start-Up Nation Central CEO Eugene Kandel and VP of Philanthropic Partnerships Laura Gilinski, at the NGO’s HQ in Tel Aviv. The organisation facilitates partnerships between start-ups and businesses, governments, and academic institutions. MPs heard about Israel’s high-tech success in dozens of industries including cyber security, agritech and digital healthcare, learning that there is one startup for every 1,500 Israelis, the highest number per capita in the world.

Mark Pawsey MP, who was visiting Israel for the first time, said that learning about the country’s innovation has “been a real eye-opener and there are lots of lessons that we can learn in the UK from the way businesses are being supported in Tel Aviv”.

In Tel Aviv, the delegation also had lunch with Member of Knesset for the Blue and White alliance and former Deputy Director of Mossad, Ram Ben Barak. The group discussed concerns over the Iran nuclear deal and regional security threats, as well as prospects for peace with the Palestinians.

As part of the diverse itinerary, the group visited Israeli NGO Save a Child’s Heart in Holon, where they met children from developing countries around the world receiving life-saving heart surgery, and Palestinian children from the West Bank and Gaza visiting the hospital for a weekly clinic. Around half of over 5,000 children who have received the life-saving treatment are Palestinians from Gaza and the West Bank. The NGO has trained 120 doctors from 62 countries.

Robert Courts, Conservative MP for Witney, described the charity as a “great example of Israeli technology and medical care spreading throughout the world” and of “cooperation and coexistence” between Israel and the Palestinian Authority.

The delegation’s visit to the West Bank the following day began with a meeting in Jericho with Palestinian Liberation Organisation (PLO) Chief Negotiator, Saeb Erekat, for a wide-ranging discussion on local and regional issues affecting the Palestinian population. The group discussed the recently published US Peace Plan, and agreed that the resumption of direct negotiations between Israel and the Palestinians is vital to reaching an agreement on final status issues.

Eddie Hughes MP said the meeting was “an interesting opportunity to discuss with him some of the challenges ahead” adding, “It seems to me he feels the only way forward to be direct negotiations between the Palestinians and the Israelis”.

In Ramallah, MPs met with Palestinian security intelligence startup Red Crow based in Ramallah, where they heard from young entrepreneurs about opportunities for innovation for the region.

The group toured the first Palestinian-planned city of Rawabi, which seeks to be a prosperous centre for business and culture in the region, which will house 40,000 residents across 6 neighbourhoods.

After travelling to Jerusalem, the group received a tour of the city by Col. (Ret.) Miri Eisin, who gave a wide-ranging briefing on geopolitical issues, the context of the security barrier and the religious significance of the city in Judaism, Christianity and Islam.

CFI delegates later met Israeli politics expert Professor Reuven Hazan at Hebrew University for a masterclass on the Israeli electoral system, looking ahead to Israel’s third elections in a year on 2nd March.

The group then paid an inspiring visit to MATI, the Jerusalem Business Development Center, in East Jerusalem with Deputy Mayor Fleur Hassan Nahoum, meeting entrepreneurs supported by the NGO. MATI promotes economic growth in Jerusalem by providing assistance through training, mentoring and financing.

On the final night in the city, Conservative MPs met Yoav Kisch, MK for the Likud Party for a lively discussion on Israeli politics, the Middle East Peace Process and the security threat posed by Iran.

On the final day of the visit, MPs paid a moving visit to the Yad Vashem Holocaust Memorial in Jerusalem, where a wreath was laid in memory of the victims. Christian Wakeford, the new MP for Bury South, said the visit to Yad Vashem was “deeply moving and in fact incredibly hard to describe because there are no words to describe the unspeakable evil that the Jewish people faced with their only crime for being Jewish”. He added: “Ultimately, it’s highly important that we have facilities like this to make sure that we never forget and we do learn the lessons from history so that they are never repeated”.

Newly elected MP for Heywood and Middleton, Chris Clarkson, reflected on his first time in the country, stating: “Over the past week we’ve travelled all the way from the Golan Heights in the north down to Tel Aviv. We’ve been to the Holy city… We’ve been looking at religious sites, thousands of years old, years of history. We’ve also been talking about the modern political situation; we’ve been lucky to meet with representatives of both Likud and the Blue and White party this week. We’ve had a chance to discuss the complex situation leading to the third election in the space of just 11 months. So it’s a really interesting and exciting time to be involved and really grateful to CFI for this opportunity and I’m looking forward to coming back soon”.