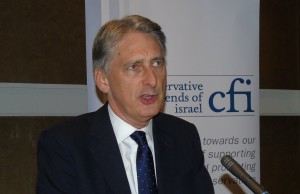 As many as 500 Conservative parliamentarians, activists and supporters packed into CFI’s ever-popular annual Reception at Conservative Party Conference on Tuesday 6th October to hear a keynote address from Foreign Secretary Philip Hammond.

The Foreign Secretary made light of Labour Party leader Jeremy Corbyn and his controversial recent failure to say the word ‘Israel’ at an event at Labour Party Conference. To rapturous applause, Mr Hammond observed: “I’ve read the reports of Mr Corbyn’s attendance at the Labour Friends of Israel meeting at Labour Conference and I just want to say one word to you: Israel. I’ll say it again: Israel!”

On the peace process: “We are clear about what we want. We want Israel and its neighbours to live in peace. We want Israel to have security. And there’s an urgent need to make progress on the Middle East Peace Process… We need to preserve the possibility of a two-state solution in the future”.

Secretary of State for Wales, Rt. Hon. Stephen Crabb MP, opened the event, proclaiming: “I stand here this evening very proud to say that I am a Conservative friend of Israel. I have been to Israel with one of the CFI trips in 2007… That visit really opened my eyes to the challenges Israel faces on a day-to-day basis in terms of security but also in terms of the enormous economic opportunities that exist for the relationship between Israel and the UK”.

CFI’s Parliamentary Chairman, Rt. Hon. Sir Eric Pickles MP, welcomed the news that the Government is taking steps to prevent Labour-run councils boycotting Israel: “Thank you very much indeed for banning, for outlawing municipal boycotts of Israel. And thank you for ensuring that councils now have to invest – not on a basis of politics – but on the basis of what’s a good investment for their pensioners”.

Thanking the Foreign Secretary for his “solid support for Israel”, Sir Eric observed: “This week has been a sad week for Israel… Where we’ve seen parents mown down in the streets of Jerusalem in front of their children. It’s a shocking thing to do. Where we’ve heard Mr Abbas refer to Jews in Jerusalem as being sacrilege and having their dirty feet on the ground – this is an outrage”.

The event brought an end to another successful Conservative Party Conference for CFI, as we signed up as many as 150 new members at our exhibition stand. The CFI exhibition stand was a hive of activity all week with hundreds of Conservative delegates from across the Party visiting to sample Israeli wine, read CFI literature – including the new edition of Informed magazine.