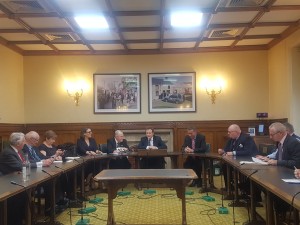 Justice Rubinstein addressed parliamentarians and answered questions on a range of issues including the upcoming Israeli election, the prospects of peace, minorities in Israel, as well as the inner workings of Israel’s legal system.

He spoke about his time as a member of Israel’s negotiation teams that secured peace deals with Egypt and Jordan, emphasising that “one shouldn’t lose hope for peace”. He said that there is currently a good security rapport between the Jewish State, Jordan and Egypt, but that this still needs to transgress to the populations of the countries.