Hezbollah leader: “No Israeli target… is out of our reach” 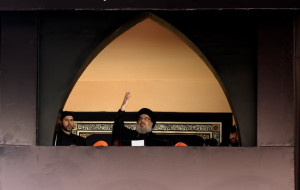 Hassan Nasrallah, the leader of the Iran-backed Hezbollah terror group in Lebanon, issued a new threat to Israel on Monday during an interview with the pro-Hezbollah TV channel Al Mayadeen.

During the interview, the Hezbollah leader warned that the terror group would do “anything to achieve our objective” if Israel begins to extract oil from Karish, the offshore oil and gas field located in the Eastern Mediterranean before Lebanon “obtains its right” to begin extraction too.

He went on to caution that it is not only the Israeli gas rig at Karish that was “under threat” but all gas and oil fields, explaining that “no Israeli target at sea or on land is out of the reach of the resistance’s precision missiles”. Nasrallah boasted that Hezbollah has drones “that can evade the enemy”, claiming that in recent years a number of drones have “entered parts of the Galilee and returned without being shot down”.

Nasrallah’s threat of violence is the latest in a series of recent events and threats in the growing tensions between Israel and Lebanon over the location of the Israeli gas rig and the long-term efforts to agree to a maritime border.

The tensions have increased in recent weeks after a gas production vessel arrived in Israel to launch extraction operations at the gas field, drawing condemnation from Lebanon, which had laid claim to parts of it. Amos Hochstein, the U.S. mediator who is working with Lebanon and Israel to advance an agreement over the disputed border, is expected to return to Beirut on Sunday in search of a resolution.