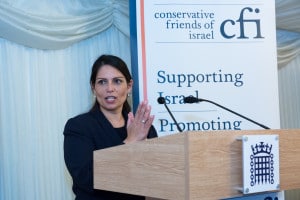 Home Secretary Rt. Hon. Priti Patel MP described herself as a “strong defender” of Israel and emphasised the UK Government’s “unflinching and unequivocal” support for the State of Israel in her keynote speech at Conservative Friends of Israel’s Annual Parliamentary Reception on Monday.

Reflecting on the UK Government’s proscription of the Hamas terror group in its entirety last year, the Home Secretary said she is “quite unapologetic” about the decision, noting that it was “not just the right thing to do, [it was] a moral imperative”.

Addressing an audience of 140 CFI supporters, including 50 parliamentarians, the Home Secretary said that Israel is “deeply personal” to her. She emphasised that the UK and Israel both have an “unwavering belief in freedom, democracy and security” as well as “shared values”.

She reiterated that we are “united in speaking out and standing up against racism and antisemitism”, adding that “everything we have seen around the BDS movement is racist”.

“We have a prosperous future together, there’s no doubt about that, for centuries to come”, the Home Secretary said.

“We can never tolerate extremism… it absolutely erodes the fundamental rock of security and with that peace and prosperity”, she said, adding that the UK Government “will continue to send out the strongest messages around zero tolerance towards terrorist activities, but also towards the type of activities that are aimed and targeted at hurting the State of Israel, Jewish communities and the people of Israel”. 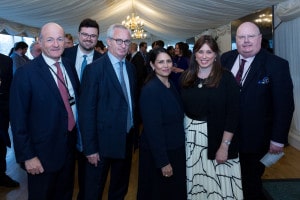 In her keynote address, the Home Secretary thanked the Israeli Ambassador for “who you are and what you do”, and for the “wider support” that Israel gives to the UK.

She added that we should take “great pride” in celebrating Israel’s 74th anniversary and gave a “personal thank you” to CFI for being “champions of freedom, prosperity… peace and security” – “something that binds and unites us all”.

The Secretary of State extended her “sympathies and condolences” to the families of the 19 victims of recent “appalling” terror attacks in Israel. 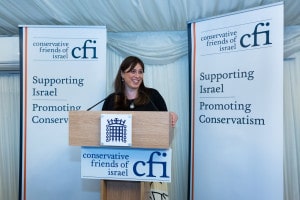 Israeli Ambassador H.E. Tzipi Hotovely praised the Home Secretary for her work in “combating terrorism, fighting all types of extremism and fighting antisemitism”.

She thanked CFI for “its incredible work that really contributes to the prosperity of our wonderful democracies”, describing CFI as “an organisation that stands behind actions”. The Ambassador thanked CFI Parliamentary Chairman Rt. Hon. The Lord Pickles and Rt. Hon. Stephen Crabb MP and CFI Honorary President Lord Polak CBE for working to strengthen the UK-Israel relationship.

H.E. Tzipi Hotovely said that CFI is “always there on the front line to help us to fight BDS” and stands with Israel against the threat from Iran.

The Ambassador welcomed the resumption of CFI’s delegations programme, underlining that “you can’t really know Israel without experiencing it”.

Lord Polak CBE gave the vote of thanks at the event, thanking the CFI team, the Home Secretary and the Israeli Ambassador. He welcomed the Government’s proscription of the Hamas and Hezbollah terror groups in full and urged the Government to proscribe the Islamic Revolutionary Guard Corps.