Iran responds to Foreign Secretary: ‘We are unchanged, Israel must be destroyed’

Following Foreign Secretary Philip Hammond’s visit to Iran last weekend and assertion that Iran’s attitude towards Israel had shifted, a top Iranian official responded on Tuesday to insist that the Islamic Republic had not changed its position and that “Israel should be annihilated’.

Speaking to Iran’s Fars news agency, the Iranian Parliament Speaker’s Adviser for International Affairs Hossein Sheikholeslam said: “Our positions against the usurper Zionist regime have not changed at all; Israel should be annihilated and this is our ultimate slogan.”

He also added that Britain’s colonial past will never be forgotten.

On Sunday, Foreign Secretary Hammond reopened the UK Embassy in Tehran nearly four years after it was closed. In 2011, the Embassy was stormed and ransacked by a group of hardline student protesters.

Speaking to BBC Radio Four’s Today programme this week, the Foreign Secretary suggested that although Iranian leaders have repeatedly called for Israel’s destruction, “that was the position of the previous president [Ahmadinejad]” but that the current regime “has a more nuanced approach.”

Foreign Secretary Hammond said that Iran should be judged “by their actions as much by their words” and “what we’re looking for is behaviour from Iran towards Israel that slowly rebuilds their sense that Iran is not a threat to them”.

Read the press release in full below. 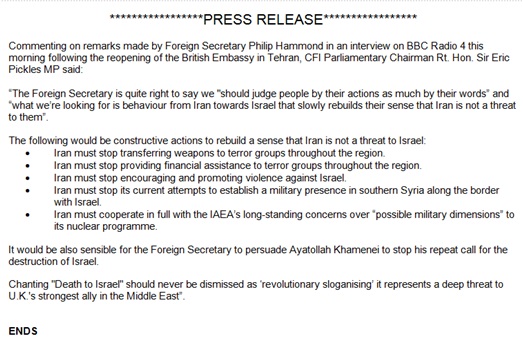