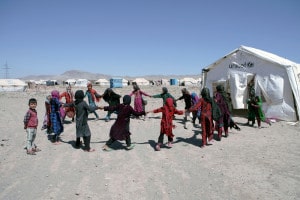 Israel has donated $500,000 to the United Nations for food, medical aid and other assistance for Afghan refugees in Tajikistan. Alon Ushpiz, Director General of the Foreign Ministry, said Israel is proud to be part of the international effort to help Afghans who fled from the Taliban takeover of the country in August, and went on to explain that the aid was part of Israel’s commitment to the international community.

The pledge comes after the UN launched its “largest ever appeal”, according to UN humanitarian chief Martin Griffiths, on Tuesday. Over $5 billion is required to help 22 million Afghans, whose country is on the brink of a humanitarian crisis and economic collapse, as well as 5.7 million Afghan refugees in five neighbouring countries.

When the United States ended its 20-year war in Afghanistan in mid-August 2021, the Taliban once-again seized control of Afghanistan; since then the country has plunged into financial chaos, with inflation and unemployment surging.

The appeal is needed to support UN partner organisations, such as NGOs who deliver aid and the UN’s refugee agency (UNHCR), as well as to pay frontline workers via legitimate channels. The aim, as explained by UN aid chief Martin Griffiths, is to “stave off widespread hunger, disease, malnutrition and ultimately death”.

UN refugees chief Filippo Grandi further clarifies that the aid package’s goal is to stabilise the situation within Afghanistan, including for internally displaced people, thereby preventing a further flood of migrants fleeing across the country’s borders.