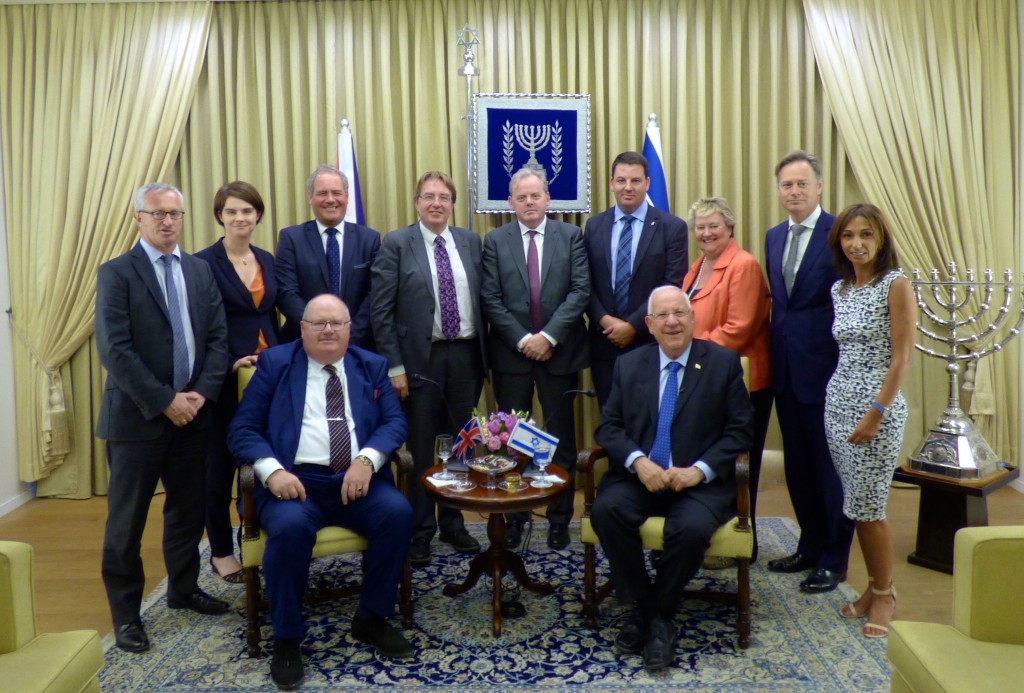 The visit marked the formation of CFI’s new team of Parliamentary Officers that, working alongside Sir Eric, will serve as Israel’s strongest supporters in Parliament.

The delegation, which featured a full itinerary of political and security briefings, gave the group a first-hand look at the latest situation in Israel ahead of the next Parliamentary term.

During their visit, the delegation met with the President of Israel Reuven Rivlin and senior Government figures, including Deputy Foreign Minister Tzipi Hotovely. At the Knesset, the group met with Yesh Atid leader, Yair Lapid, and the Co-Chairman of the Israel-United Kingdom Parliamentary Friendship Group, Hilik Bar MK. The MPs also met with Her Majesty’s new Ambassador to Israel, H.E. David Quarrey.

The packed itinerary also included a visit to Sderot in southern Israel to see the remains of Hamas rockets, in addition to the Netiv Ha’Asara moshav where MPs saw the entrance to a Hamas cross-border terror tunnel, and the beach in Zikim kibbutz where Hamas terrorists attempted to launch a terror attack from the sea last summer. In Ashkelon, the group visited one of the world’s largest desalination plants, before visiting Save A Child’s Heart in Holon to meet with Palestinian children from Gaza and the West Bank receiving life-saving heart surgery.

In Bethlehem, the delegates met with the Mayor of Bethlehem, Vera Baboun, who explained her vision of strengthening the economy of the area and visited the Church of the Nativity.

The trip received significant media coverage, with articles appearing in the Jerusalem Post, Jewish Chronicle and Jewish News. Matthew Offord MP has also written about his experiences of the trip on his official website.

"It has been a great pleasure to visit Israel once again with CFI alongside so many colleagues. Our superb itinerary has afforded us an insight into the many faces of Israel; from the country’s vibrant democracy, to the scientific advances of the Weizmann Institute, and the gift of life that Save A Child’s Heart has given to almost 4,000 children with cognitive heart defects from Gaza, the West Bank and beyond. Israel can rest assured that it has an eternal friend in the Conservative Party, and my fellow CFI Officers and I have renewed determination to support Israel in Parliament and showcase its remarkable achievements."

"It was extraordinary to see with my own eyes the remains of Hamas rockets in Sderot, a Hamas terror tunnel in Netiv Ha’Asara, and the beach in Zikim kibbutz where Hamas terrorists emerged from the sea. Hamas and Gaza’s other terrorist organisations continue to pose a profound threat to the peace and security of Israel’s southern communities."

"Every visit to Israel reveals another fascinating aspect to this extraordinary country. The ingenuity and resolve of the Jewish state was perfectly highlighted with a visit to a remarkable desalination plant in Ashkelon, which should give hope to water-poor countries around the world that water shortages can be tackled safely."