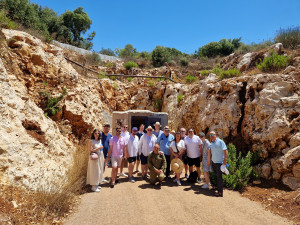 CFI coordinated a delegation to Israel and the Palestinian Authority last week with 10 Conservative parliamentarians most of whom were elected in the 2019 General Election and were visiting for the first time.

The itinerary featured a tour of a Hezbollah terror tunnel on the Israel-Lebanon border – a first for a CFI delegation. It also included a series of high-level meetings with Israel’s Deputy Foreign Minister Idan Roll, entrepreneurs, diplomats, and academics, as well as briefings with the IDF and non-profit organisations. The delegation also travelled to the West Bank for a meeting with Palestinian Authority Prime Minister Mohammad Shtayyeh.

The MPs recorded videos sharing their thoughts on the speakers and sites visited throughout the trip, which can be viewed on CFI’s Youtube account.

The delegation began with an introductory briefing on Israeli domestic politics with Lahav Harkov, the diplomatic correspondent and senior editor for the Jerusalem Post. This was followed by a dinner meeting with Darya Shaked, an Israeli entrepreneur and women’s empowerment leader. The parliamentarians discussed what the UK and Israel can learn from one another in supporting entrepreneurship in our respective countries.

The following day parliamentarians travelled to the North of Israel to view terror tunnels dug by Hezbollah from Lebanon into Israel, which had been uncovered by the IDF. The tunnels were over 2km in length and approximately 80m deep, built with the intention of bypassing Israeli security forces to commit terrorist acts in Israeli towns and smuggle weapons to potential terrorists in Israel. Nicola Richards MP said that it was “incredible to see first-hand” the “immediate threat” that those who live in the Israeli border communities have to deal with.

The group visited the Israeli NGO Save a Child’s Heart (SACH) in Holon, where they met children from developing countries receiving life-saving heart surgery from Israeli doctors, free of charge. Around half of over 6,000 children who have received the life-saving treatment are Palestinians from Gaza and the West Bank. The delegates also spoke to a doctor from Gaza working with SACH to coordinate the medical treatment in Israel of children from Gaza. Paul Holmes MP reflected: “What has really struck me today is the cooperation and pride that doctors from Gaza and Israel have in making sure children from both sides of the border are treated equally and fairly”.

The next stop was at Start-Up Nation Central in Tel Aviv, an organisation which facilitates partnerships between start-ups, businesses, government bodies, and academic institutions. After viewing these innovative companies, Louie French MP said what most impressed him about the centre was the “various technologies [that] are being developed” to tackle those big issues that we are facing and that we will face when looking towards the future, such as climate change.

The delegation was then hosted by the Deputy Head of Mission at the British Embassy, Alice Truman where they discussed the direction of bilateral ties and updates on Britain’s strategic goals in the region.

The delegations’ visit to the West Bank on Wednesday began with a visit to the first Palestinian-planned city of Rawabi, which seeks to be a prosperous centre for business and culture in the region, housing 40,000 residents. In Ramallah, the group met with Palestinian Authority Prime Minister Dr Mohammad Shtayyeh before receiving a briefing from Palestinian polling expert Dr Khalil Shikaki on the latest public opinion trends among Palestinians.

The MPs then travelled to Jerusalem where they received a comprehensive tour of Israel’s security barrier from Col. (Res.) Dr Dany Tirza, the IDF’s chief architect for the security fence. Dr Tirza explained that 95% of the barrier consisted of chain-link fence and had been constructed as a response to Palestinian suicide attacks during the Second Intifada.

During the delegation, the MPs were joined by Rt. Hon. Sajid Javid MP who was in Israel on holiday, and together they visited the Yad Vashem Holocaust Memorial in Jerusalem and paid respect to the victims of the Holocaust. In memory of the six million men, women and children who perished under Nazism, Tom Randall MP lit the eternal flame and Nicola Richards MP laid a wreath on behalf of the parliamentarians.

At the Israel Museum, the group viewed the historically significant Dead Sea Scrolls, before ending the day by meeting the founding editor of the Times of Israel David Horovitz.

On the last day of the trip, the Parliamentarians toured the Old City of Jerusalem, where they experienced the city’s religious sites by visiting the Western Wall, the Church of the Sepulchre and Temple Mount/al-Haram al-Sharif.

Gary Sambrook MP reflected on the delegation, explaining that for him the focus was seeing the “cultural and historical ties” between the UK and Israel in person, and learning how we can “further those ties between our two countries” in the future and back home.