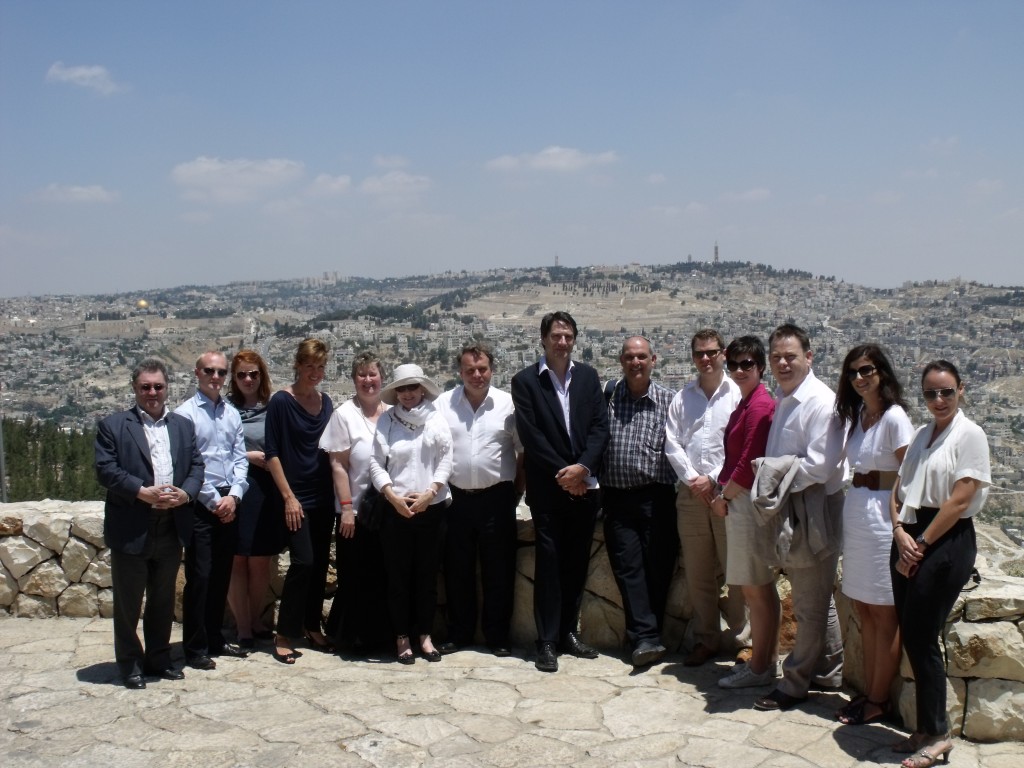 CFI led a delegation of six Conservative MPs to Israel for a business and security orientated trip during the Whitsun recess.

During the visit, the group met with Members of the Knesset and Foreign Ministry officials, with a packed itinerary that included a briefing with Deputy Foreign Minister Danny Ayalon, leading Israeli spokesman Mark Regev, in addition to a round-table meeting with MK’s Nachman Shai, Daniel Ben-Simon, Yoel Hasson, Yariv Levin, Anastasia Michaeli, and Majalli Wahabi. Her Majesty’s Ambassador to Israel, Matthew Gould, hosted a private dinner for the delegation during which he spoke warmly about UK-Israel bilateral relations.

The visit to Sderot included a whistle-stop visit to a school, during which the MPs spoke with older students about everyday life in the town and handed out toys and learning materials to younger children.

While in Jerusalem, the MPs had the opportunity to explore the historic Old City and were given a tour of the security barrier.

On their visit to the Palestinian Authority, the delegation met with Samir Abdullah, previous Minister of Housing, and had lunch with a group of leading Palestinian businessmen, before visiting Rawabi in the West Bank, which is set to become the first new Palestinian-planned city.

Other events on the visit included a tour around Israel’s renowned Yad Vashem Holocaust Museum, a business visit to Israel HealthCare Ventures to learn about Israel’s high-tech medical industry, and dinner with Israeli journalists, Alon Ben David and Yaron Deckel.

"Our recent visit to Israel was an amazing visit to the country and extremely well organised! We visited the Gaza Strip and saw the border post between Gaza and Israel, the equipment and technology provided at the border post is second to none in the world. We also visited a police station where we saw evidence of the rockets that are being fired into Israel from Gaza, some homemade from ‘lampposts’, some custom built in Iran. I would thoroughly recommend to all of my Parliamentary colleagues if they have not visited Israel that they should do so in the very near future."

"The trip was packed to the minute, with no time wasted at all. We were given every opportunity to learn about the situation on the ground. No question was off-limits and the openness of all the people we met gave me hope for the future for peaceful recognition and continued economic growth. I am so impressed with the sheer ‘get up and go’ of the people and companies we met. I expect living under such a constant fear really concentrates the mind to live every moment to the full."

"It was a huge eye opener and having come away I feel far better informed about the current situation. It is clear there is so much misinformation being pedalled around so such trips are hugely worthwhile."

CFI Delegation at The Portland Trust in Ramallah, West Bank

CFI Delegation at The Portland Trust in Ramallah, West Bank