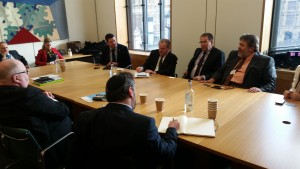 Conservative MPs were briefed yesterday in Parliament by a panel of leading Israeli high-tech innovators in a CFI event chaired by Parliamentary Vice-Chairman Guto Bebb MP.

Strong links in the fields of science and technology have been spearheaded by schemes such as the UK-Israel Tech Hub; Britain Israel Research and Academic Exchange (BIRAX); and a top-level UK-Israel Life Sciences Council, bringing Israeli and British scientists together for joint research projects.

Israel’s Teva Pharmaceutical Industries provides the NHS with one in six of its prescription medicines, making it the NHS’s largest supplier of generic drugs.

Mor Assia emphasised the importance of forging further relationships between British and Israeli investors and high-tech companies, with crowdfunding platforms playing a key part in this.

She noted the rapidly increasing investment in Israeli companies from investors in Asia, particularly in China, and the impact this has had in advancing Israeli innovation.

Yaacov Michlin also spoke of the importance of technology collaborations and expressed his desire for more Israeli companies to benefit from the UK market, with many already doing so.

In a discussion about potential opportunities in the UK for Israeli companies, Mary Robinson MP suggested that they should consider broadening their sights away from London and instead look into potential business in Manchester and the ‘northern powerhouse’, where possibilities are extensive.

Guto Bebb MP closed the briefing by stating that the UK is “an open-door, flexible free trade economy” and encouraging Israeli companies to take advantage of the opportunities in the British market.