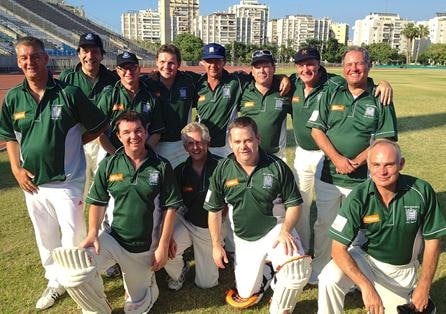 The Lords and Commons Cricket Club visited Israel in October 2012 for a landmark cricket tour, in co-ordination with CFI.

The extremely successful trip, which offered a completely different way of introducing cross-party parliamentarians to Israel, combined an original mix of cricket and political fact-finding.

The trip was the brainchild of team captain Conservative MP for Selby and Ainsty, Nigel Adams MP, who came up with the idea during a CFI trip to Israel in May 2011.

We were delighted to be joined by former England cricket captain John Emburey, who proved a real hit with Israel’s cricket fans.

The tour, which sought to highlight co-existence within Israeli society, was organised with the assistance of the Israel Cricket Association (ICA), which was awarded the Spirit of Cricket Award for their Cricket4Peace project at International Cricket Council (ICC) Development Programme Awards in 2011.

The MPs visited Be’er Sheva to see the excellent work of the Cricket4Peace project, run by the ICA and the Peres Center for Peace, which is the first cross-border peace building project to use cricket to bring together Israeli and Palestinian children from disadvantaged communities.

The group also visited the Bedouin town of Hura in the Negev to see the ICA’s Cross-Border Cricket Project which has proven extremely popular amongst local Bedouin children. In Hura, the group received a warm welcome in a traditional Bedouin tent and took the opportunity to visit a local school, before a series of training sessions with local students from the Hura Youth Cricket Club.

The Lords and Commons Cricket Club (LCCC) played a number of cricket games during the visit; against reigning national champions, Young Ashdod CC and against an invitational XI assembled by the Chairman of the ICA, Stanley Perlman, which included a number of former international Israeli cricket captains.

During the visit, the group were pleased to be able to donate cricket equipment and clothing provided by the England Cricket Board to the Hura Youth Cricket Club, the ICA and the Peres Center for Peace to help them continue their work.

The trip also included a number of fact-finding visits, with the group visiting Sderot to hear about the effects of on-going rocket fire from Gaza, Yad Vashem Holocaust Memorial and the Old City of Jerusalem.

British Ambassador to Israel, H.E. Matthew Gould, also hosted the group for a briefing, during which the group heard about the UK-Israel Tech Hub.

The cricket tour received a very positive response in the Israeli press with Haaretz and The Times of Israel publishing a number of stories.

"Hopefully our visit helped to promote the peace initiative, which shows that sport can bring communities together. To see Israelis and Palestinians playing together was very inspiring. The ICA has some very fine cricketers and the hospitality was first-class. We hope to visit again in the future."

"The MPs were the most wonderful visitors we’ve had since my involvement with Israeli cricket began. They were exemplary ambassadors for their country and are welcome back any time. It was great to see the youngsters listening to John Emburey. I know the group had an unbelievable time and I’m sure it won’t be long before they return."