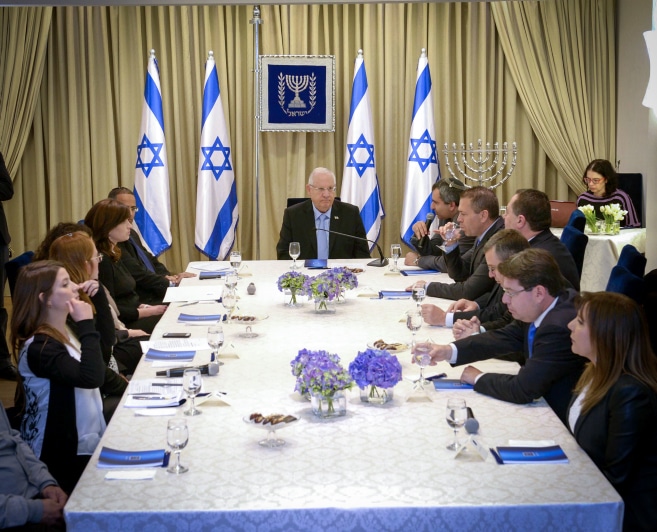 In the next stage of the formation of a new Israeli government, President Reuven Rivlin has held separate meetings today and yesterday with each party that will be represented in the new Knesset. Following the meetings President Rivlin is expected to appoint Netanyahu to the task of forming a coalition.  Serious coalition negotiations between the parties are expected to begin on Wednesday, and Netanyahu will have four weeks to form his government, with an option to extend talks for another two.

The elected members of Yair Lapid’s Yesh Atid party told President Rivlin earlier that it would not recommend anyone for the premiership and that the centrist faction would sit in the opposition.

The centre-left Zionist Union part, left-wing Meretz, centrist Yesh Atid,  and the Joint (Arab) List, are expected to sit in the opposition.

Of 88 MKs representing the first group to meet with President Rivlin on Sunday, a total of 51 nominated Netanyahu to lead the government.

The Zionist Union and the Joint List were the only two parties not to nominate Netanyahu on Sunday, with the Zionist Union’s 24 members nominating party leader Isaac Herzog center-left party and the Joint (Arab) List (13 seats) opting to not nominate anyone, due to its rejection of Zionist parties.