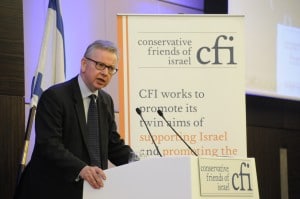 Rt. Hon. Michael Gove MP underlined his staunch support for Israel and condemned “dark and furious” activism against the Jewish State yesterday, at one of CFI’s largest ever Annual Business Lunches – attended by 700 guests, including 170 Conservative parliamentarians and nine Cabinet members.

The Secretary of State for Environment, Food and Rural Affairs, who received a standing ovation for his speech, said it was a “great honour” to be asked to address CFI’s Annual Business Lunch, which he described as “one of the biggest events in the political calendar for any parliamentarian”.

Mr Gove described Israel as “a light to the world”, which he prays “burns brightly for all time”. He added that “no greater success story could have been invented, and no greater source of hope could have been imagined than the creation, preservation and present thriving of the world’s one and only Jewish state”.

The Secretary of State said that last month the UK Government “celebrated the 100th anniversary of the signing of the Balfour Declaration”, emphasising that there should be “no ambiguity” over the UK’s pride in “the role we played in the restoration of Jewish sovereignty in the Land of Israel”.

Mr Gove also reflected on the 50th anniversary of the Six-Day War as a “dark hour” when Israel’s neighbours sought “once again… to wipe it out”.

He underscored that today, “there is no abatement in the threat to Israel”, with the growth of an anti-Israel movement in recent years “fuelled by a dark and furious energy”.

This movement “hopes to take advantage not only of fading memories and youthful ignorance”, he said, “but of residual and nascent bigotries of the worst kind”.

The Environment Secretary said that “we can – and should – feel gratitude” for the “founders of the State of Israel and the generations of its citizens who endured so much, worked so hard and gave so much” to ensure the state’s prosperity.

Mr Gove said that in 2017 the UK Government “celebrated the 100th anniversary of the signing of the Balfour Declaration”; “an important milestone in the path to the establishment of the State of Israel”.
He emphasised that there should be “no ambiguity” over the UK’s pride in “the role we played in the restoration of Jewish sovereignty in the land of Israel”.

He underlined: “At a time when our history in Britain has become, for many, either an embarrassment or an indictment, let us be clear that committing to provide a home for the Jewish people was not just a moral good, it has been a success for mankind, a vindication of the human spirit”. Mr Gove said that we should “never apologise for that”.

Mr Gove added that “although the Balfour Declaration was an important milestone in the path to the establishment of the State of Israel, Britain did not give the Jewish people a state”, emphasising that the land of Israel had “always has been and always will be the historic homeland of the Jewish people” and is their “birth-right”.

He said that “every single inch of that land has been fought for and died for by generations of Israelis and generations of Jews” who “did not simply demand their rights”. “Not a piece of that land came easily or remained easily”, Mr Gove emphasised, and “every portion of it has been fought for with sacrifices that are unimaginable for most of us sitting here today”.

Britain played a “small part” in the creation of Israel, he said, and we “can – and should – feel gratitude” for “the founders of the state of Israel and the generations of its citizens who endured so much, worked so hard and gave so much”.

Mr Gove hailed the State of Israel as a “beacon of democracy in the Middle East”; “a land of laws and liberty in a region scarred by extremist ideology and military oppression”; and “an incubator of lifesaving technologies and liberating innovation in a neighbourhood where others hold lives cheap and want to keep people in a state of medieval servitude”.
He said that “no greater success story could have been invented, and no greater source of hope could have been imagined than the creation, preservation and present thriving of the world’s one and only Jewish state”.

Mr Gove asked those gathered: “If you were growing up gay in any country in the Middle East where would you feel safest? If you were accused by the state prosecutors in a Middle Eastern state of a crime of which you were innocent where do you think you would be most likely to secure a fair trial? If you were a journalist in a Middle Eastern state and you uncovered wrongdoing in the highest levels of Government, in which country would you feel most confident you could publish your revelations in safety?”

The answer, “again and again”, he said, is Israel – where “human dignity, the rule of law and free speech are protected as nowhere else… The land that was once a desert and which now blooms, which was built by refugees and now comes to the aid of the suffering worldwide, which has been under siege for decades but is one of the most intellectually innovative on the planet”.

Mr Gove said that Israel’s enemies do not want “a smaller Israel”, but instead they want “no Israel”, adding that Israel is attacked “not because of where its borders currently lie”, but “because it has borders at all”.

The “elimination” of Israel is the “political project of Hamas, the military ambition of Hezbollah, the dark fantasy of Al Qaeda and the animating wickedness at the heart of ISIS”, he declared.

Mr Gove emphasised the importance of restating these facts “because there is no abatement in the threat to Israel”, which has grown in the UK “as a movement has grown in vigour and audacity in attacking Israel”. He said that this movement seeks to “paint Israel as the sole aggressor in the Middle East and the sole cause of any and all instability in the region” and “an illegitimate state acting outside the law”.

He said that in November 2017 alone there were “176 anti-Israel events across the UK” – “six a day”, and this “determined and implacable activism” is “evidence of a movement fuelled by a dark and furious energy”. The “anti-Israel movement hopes to take advantage not only of fading memories and youthful ignorance”, he said, “but of residual and nascent bigotries of the worst kind”.

Mr Gove asked those in attendance to “consider the way in which those who continually attack Israel argue that the country is a pariah among nations and must end the ‘occupation’”. “Very often – perhaps even more often than not”, he said, “the people talking about occupation are not talking about Ramallah, Bethlehem or Nablus… They are talking about every inch of the state that was declared nearly 70 years ago”.

“These people keep showing their true colours – again and again”, he added, citing a protest at the American Embassy in London last Friday to object to U.S. President Trump’s decision to recognise Jerusalem as Israel’s capital.

The crowd did not “call for a two-state solution, with Israel and a future Palestinian state living side by side”, instead large numbers chanted “Khaybar Khaybar, ya yahud, Jaish Muhammad, sa yahud”, meaning “Jews, remember Khaybar the army of Muhammad is returning”.

He queried why, “when talking of the city that the Israeli government long-ago declared as its capital, would they invoke a battle 1,400 years ago where Muslim armies captured and slaughtered Jews?”

“Such people”, he said, “have a fundamental problem with the existence of any Jewish state anywhere in the world, and especially in what has been the homeland of the Jewish people long before any other surviving claimant came along”.