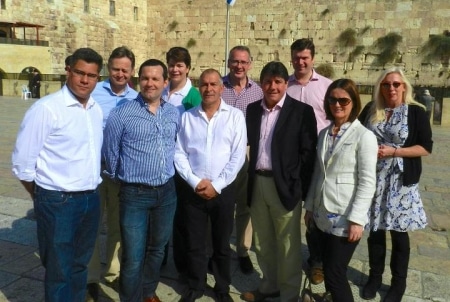 In November 2013, CFI led a security and business orientated delegation of 4 Conservative MPs and 5 Conservative Prospective Parliamentary Candidates (PPC) to Israel and the West Bank.

The group visited Israel’s northern borders with Syria and Lebanon to hear briefings from the IDF about the security threats posed by Hezbollah and Syria’s civil war.

In Jerusalem, the delegation visited the Knesset and the Ministry of Foreign Affairs for meetings with Deputy Foreign Minister, Ze’ev Elkin MK, and Mark Regev, spokesperson for Prime Minister Benjamin Netanyahu.

During their visit to the Knesset, the group were welcomed by Deputy Speaker Hilik Bar MK and even received a standing ovation from the floor of the Knesset for their support of Israel.

In Tel Aviv, the group learned of Israel’s high-tech start-up scene at Google’s Campus and hear about the peaceful coexistence work bringing together Arab-Israeli, Jewish-Israeli and Palestinian children at the Peres Center for Peace.

Her Majesty’s Ambassador to Israel, Matthew Gould, hosted the group for dinner, before which the UK-Israel Tech Hub gave a briefing on the deepening relationship between UK and Israel high-tech start-ups.

The group heard about the problem of Palestinian Authority-sanctioned incitement against Israel during a briefing from Palestinian Media Watch.

Other activities included a visit to Yad Vashem Holocaust Memorial and tours of the Security Barrier and Jerusalem’s Old City.

On their visit to the Palestinian Authority, the delegation met with Dr. Nabil Shaath, senior Fatah official and veteran Palestinian negotiator, as well as his advisor Husam Zulmot in Ramallah, before visiting Rawabi, the first Palestinian-planned city.

"An understanding of the complexities of the region requires a grasp of its geography, history and people; our itinerary aimed to achieve all this. Informative and insightful, I found the CFI trip profoundly affecting in a way I had not forseen."

CFI Delegation outside the Church of the Holy Sepulchre, Jerusalem

CFI Delegation with MK Ze'ev Elkin at the Knesset, Jerusalem

CFI Delegation at the Syria border