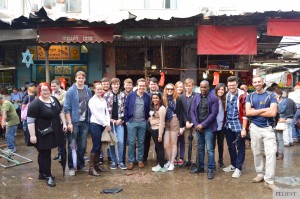 The packed and varied itinerary included meetings and briefings with experts in defence, diplomacy and politics, as well as cultural and historical visits across the country, providing an insight to the many different sides and voices within Israel.

The trip began with the group departing north to the Golan Heights, where delegates were briefed by an IDF intelligence officer on the Lebanon border about the ongoing threat from Hezbollah. This was followed by lunch in a Druze village, and from there the group travelled to Mount Bental by the Syrian border, overlooking the devastation of the ongoing Syrian civil war.

In the evening, the delegation had dinner with British Ambassador to Israel, H.E. Ambassador David Quarrey at his residence. The Ambassador gave a detailed tour through some of the key issues in the region, and answered questions from delegates on issues as far-ranging as boycotts, Syria, and the Iran nuclear deal. The group also were briefed about UK-Israel Tech Hub which works to promote the thriving technological partnership between the two countries.

The group’s visit to the West Bank began in Ramallah with a meeting with young Palestinian entrepreneurs and PLO Spokesman Dr Husam Zomlot. The meeting was followed by the tour of the first Palestinian-planned city of Rawabi, which seeks to be a prosperous business and cultural centre in the region, expecting to house over 35,000 Palestinians.

In the afternoon, the group were given a tour of Israel’s Knesset and had the opportunity to meet with Knesset Members Dov Lipman, from centrist party Yesh Atid, and Sharren Haskel, from Prime Minister Netanyahu’s Likud party. That evening, the CFI delegation led a lively discussion between leading young political activists from the youth branches of parties across Israel’s political spectrum – Labor, Yesh Atid, and Likud.

On Thursday, the delegation visited Save A Child’s Heart in Holon, where they met children receiving life-saving heart surgery and spoke with surgeons who had saved the lives of 2,000 children from around the world.

The busy itinerary also included a visit to Sderot in southern Israel to see the remains of Hamas rockets, in addition to the Netiv Ha’Asara moshav which was previously the site of entrance to a Hamas cross-border terror tunnel. At the Erez Crossing of the Israel-Gaza border, the delegation received a briefing by a Major Adam Avidan about the work of the IDF’s COGAT (Coordination of Government Activities in the Territories) in facilitating tonnes of goods every day to Gaza.

This was followed by a comprehensive tour of Israel’s security barrier by Col Dany Tirza, the chief architect of the project, who explained that 95% of the barrier consisted of chain-link fence and had been constructed as a response to Palestinian suicide attacks during the Second Intifada.

Delegates also met with Col. Dr. Eran Lerman, of the National Security Council, who spoke at length about the main security threats and conflicts playing out in the region.

During the trip, the delegates had the opportunity to tour the ancient fortification of Masada, and visit the Dead Sea. In Jerusalem, the delegation toured the Old City, visiting some of the city’s main historical and religious sites, including the Western Wall.

If you are a member of Conservative Future and would be interested on joining CFI on a delegation, please keep posted!