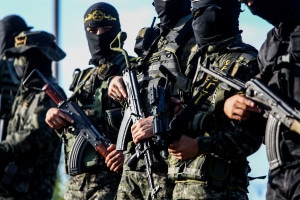 The Palestinian Islamic Jihad terror group displayed its “tunnel city” across Gaza in several videos on Tuesday, as it says it is preparing to “defend the Al-Aqsa Mosque and Jerusalem”, threatening the use of rockets. The tunnels have been built to have offensive and defensive capabilities that would allow the terror group – the second largest faction in Gaza behind Hamas – to strike Israel in surprise attacks and undermine Israel’s intelligence capabilities.

Speaking on film and wearing the symbols of the Al-Quds Brigade (the armed faction of Islamic Jihad), a spokesman stated that the movement had both defensive and offensive tunnel capabilities. In an offensive capacity, the official said the tunnels can be used in “taking Israeli soldiers captive” and carrying out “various field operations”. In the videos, masked men can be seen entering the tunnels with machine guns and grenade launchers, with the tunnels being equipped with electric lights, small armouries, ventilation systems, and telecommunication equipment.

This is not the first time tunnels have been used, with Hamas operating an advanced network of terror tunnels – many of which were targeted by Israel last year. Smugglers in Gaza have also used tunnels as a means to smuggle weapons and supplies into the territory since 2007, after Egypt and Israel imposed a blockade on the area following Hamas’ seizure of power.

Israel fears that the tunnels will once again be used to capture Israeli civilians and military personnel to use as bargaining chips in future prisoner negotiations. Israel hopes to have somewhat prevented this after installing a security barrier with an underground steel wall across the border. However, their caution still remains high with an Islamic Jihad spokesman stating “the tunnels have been repaired and the rocket stocks have been replenished” before thanking Iran for its support. It is unknown whether these tunnels penetrate into Israeli territory. A member of the terror group went on to finish that they had “received instructions to mobilise” and that the rockets were already on “high-alert” while they wait for “the leadership to decide”.