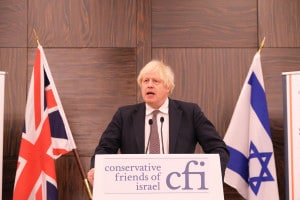 Prime Minister Boris Johnson celebrated the UK-Israel partnership, underlining “all my life I have been a defender and a supporter of Israel”, at CFI’s first Annual Business Lunch since 2018 – attended by 650 guests, including 200 Conservative Parliamentarians and 12 Cabinet members.

CFI was delighted to welcome Israel’s Minister of Foreign Affairs Yair Lapid MK as a surprise guest speaker at the lunch. The two friends, who had first met in Israel on a CFI delegation 17 years ago, were presented with chanukiot by CFI Honorary President Lord Polak CBE to mark the festival of Chanukah this week.

In their presence, Prime Minister Johnson hailed the historic Abraham Accords as “the beginning of a new chapter for the region” and said he had been “inspired” by the recent green water deal involving Jordan and Israel.

In his wide-ranging and humorous speech that received a standing ovation from the 650-strong audience, the Prime Minister described the UK and Israel as “science superpowers united in values”, welcomed the two countries leading the way in Covid-19 vaccine take-up, reaffirmed his support of Israel’s right to defend itself, and condemned Antisemitism.

He added: “But we can and must do more. And that is why, ladies and gentlemen, I am delighted to announce to you today that we will begin work on an enhanced and improved Israel and UK Free Trade Agreement at the start of next year”.

The speech came shortly after the announcement yesterday of a 10-year tech and security memorandum of understanding signed between the UK and Israel. The Prime Minister revealed that discussions on an upgraded post-Brexit trade deal would begin early next year and announced plans for a bilateral innovation summit in London in March.

Opening his speech, Prime Minister Johnson said: “It’s great to be here with so many friends to celebrate Chanukah, the festival of lights and miracles and I am honoured and delighted that we are joined by the Chief Rabbi Ephraim Mirvis, fantastic to see you, Chief Rabbi”.

Thanking CFI, Prime Minister Johnson said: “Thank you, CFI, for everything you do to take forward the friendship and partnership between our countries”.

The Prime Minister’s remarks at the event received press coverage in Britain and in Israel, including in the Times of Israel, Jewish News and Jewish Chronicle.

See below for an outline of the event, and key extracts from the Prime Minister’s speech. 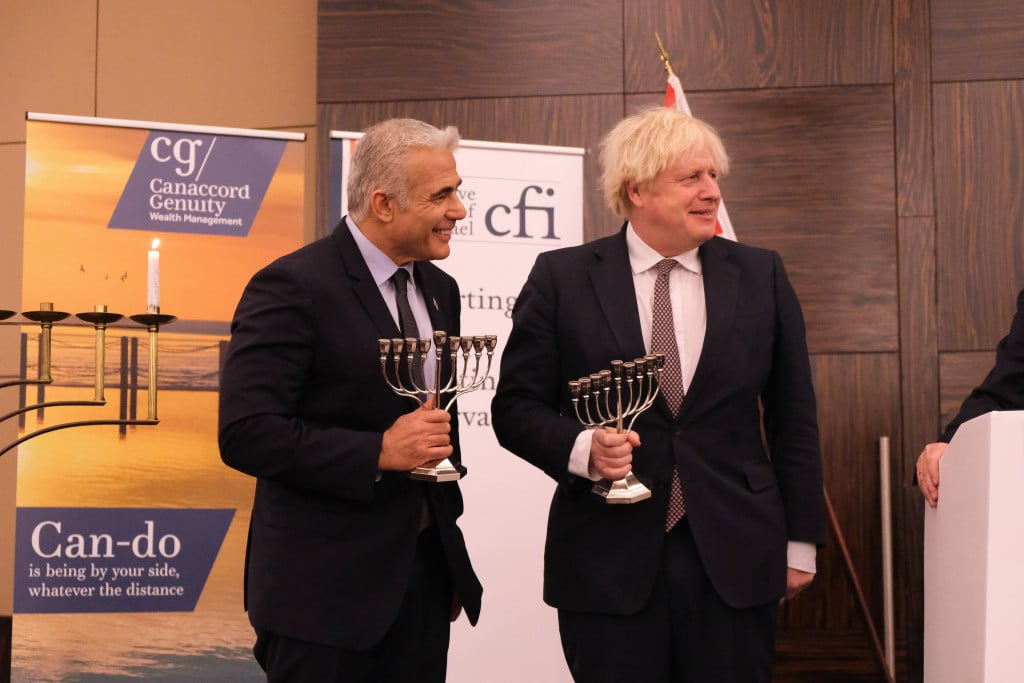 The Prime Minister said he would “never forget” his first visit to Israel at the age of 18 working on a Kibbutz, when he “saw what an incredible place it was”.

Prime Minister Johnson hailed the UK-Israel partnership, with both countries sharing “liberal values… democracy… the freedom to think and create – all bound up with the spirit of enterprise and healthy competition”.

The Prime Minister said that the “relationship that is getting stronger the whole time”, as he “discussed with President Herzog on his visit to London last week”.

He announced that the UK and Israel had agreed a joint Memorandum of Understanding, which “will deepen and expand cooperation on joint priorities such as security, science, tech, and R&D”.

The Prime Minister said: “We are proud and honoured that more than 10,000 businesses in the UK are trading with Israel to the tune of £4.6 billion from the Rolls Royce engines that power El Al… to the recent surge in exports of Scotch whisky”. He added that his “old friend” Foreign Minister Lapid and Ambassador Hotovely had also informed him that “1 in 6 of the medicines in this country comes from Israel”.

“We can and must do more”, he said, adding that he was “delighted” to announce that “we will begin work on an enhanced and improved Israel and UK Free Trade Agreement at the start of next year”. The Prime Minister also announced the establishment of “a new Britain-Israel partnership fund focused on scientific research” and confirmed that the UK will host a bilateral innovation summit in London next March, as agreed with Israeli Prime Minister Bennett.

The Prime Minister noted that the UK and Israel have been in “regular contact and share advice” during the Covid-19 pandemic, with both countries sharing a “respect and understanding for science and for technology and the miracles that science can perform” as well as a “rationalism and joint belief in vaccination”. He described both countries as “science superpowers”.

“Is it not extraordinary that it should be the two populations of Britain and Israel, both fiercely independent minded lovers of liberty… free nations reluctant to be told what to do and yet it is we, our two populations, who have been the most dynamic and enthusiastic about getting our jabs. We queued up to do it, we in the UK were second to Israel in the first great vaccination campaign. We are second now in the race to get boosted”, he added.

The Prime Minister underlined: “Let us continue to hope that with Israel and the UK working together, as science superpowers united in values, our shared discoveries and breakthroughs and efforts will offer protection not just to our two countries but to the entire world”.

Prime Minister on the Abraham Accords

He emphasised that it is “with that progress being made that we must be ever more vigilant in the fight against terrorism”.

The Prime Minister said that the fight against terrorism has “led us… to proscribe Hamas in its entirety, once and for all”.

“The UK supports Israel’s right to defend itself with no equivocation, including from hostile states like Iran”, he said.

“Along with our American and European friends, we will continue to do everything we can to prevent Iran from obtaining a nuclear weapon… But while the nuclear issue is the most urgent, Iran’s overall behaviour has to change. The attacks at sea, the support for terrorism, the destabilisation of the region all form part of the same pattern”.

The Prime Minister emphasised that “if you can count on my support, and our support for Israel, you can certainly count on our support, this Government’s support, in the struggle against Antisemitism abroad with our opposition to the Durban IV conference – and our opposition, our fight, against Antisemitism at home, where tragically, tragically in my view, the thousand year old spores of that virus have continued to incubate beneath the floorboards of our country”.

“I deplore the treatment of Israel’s great Ambassador, Tzipi Hotovely, that she faced outside one of our universities… I abominate the know-nothing anti-historical abuse that is directed at Jewish people online and in some university campuses”.

He said that this is “why we’ve brought forward our bill on academic freedom and I am pleased that more and more far-sighted universities are now adopting the IHRA definition of Antisemitism first adopted by this country and announced at this lunch five years ago”. It is also why “we have legislation coming that will stop public bodies pursuing BDS campaigns against Israel”, he confirmed.

Prime Minister Johnson said of all this government’s achievements, he is “most proud of” protecting the UK against the “weevil infestation of Antisemitism in the Labour Party”.

Prime Minister Johnson: “I thank Conservative Friends of Israel for all that you have done over the last few years… Thank you, CFI, for everything you do to take forward the friendship and partnership between our countries”.

The Prime Minister added: “That’s why we Conservative Friends of Israel need to keep going… we need to keep the fight up… I will continue to offer you my wholehearted solidarity and support”. 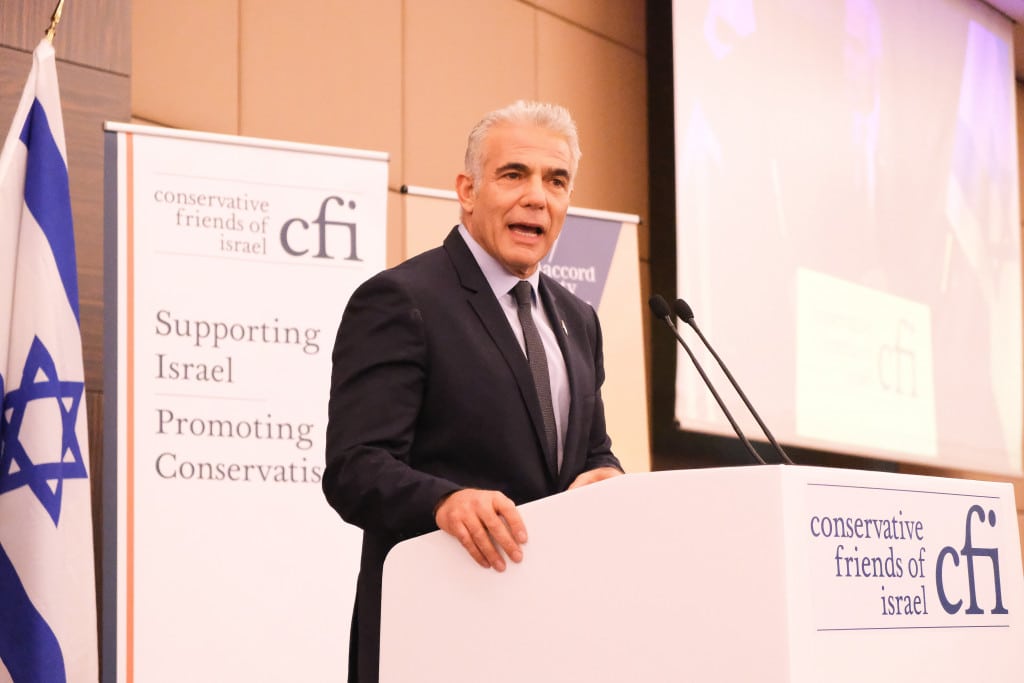 Making a powerful address on Israel’s security measures, and the lessons Israel had learnt from the UK, Mr Lapid said: “Britain taught the world an unforgettable lesson. Whoever is unwilling to fight for freedom, won’t get it. It is still true today… There is such a thing as good and evil”.

He added: “We have the right to defend ourselves. Our children will not grow up in shelters, under rocket fire – something the British know something about”. 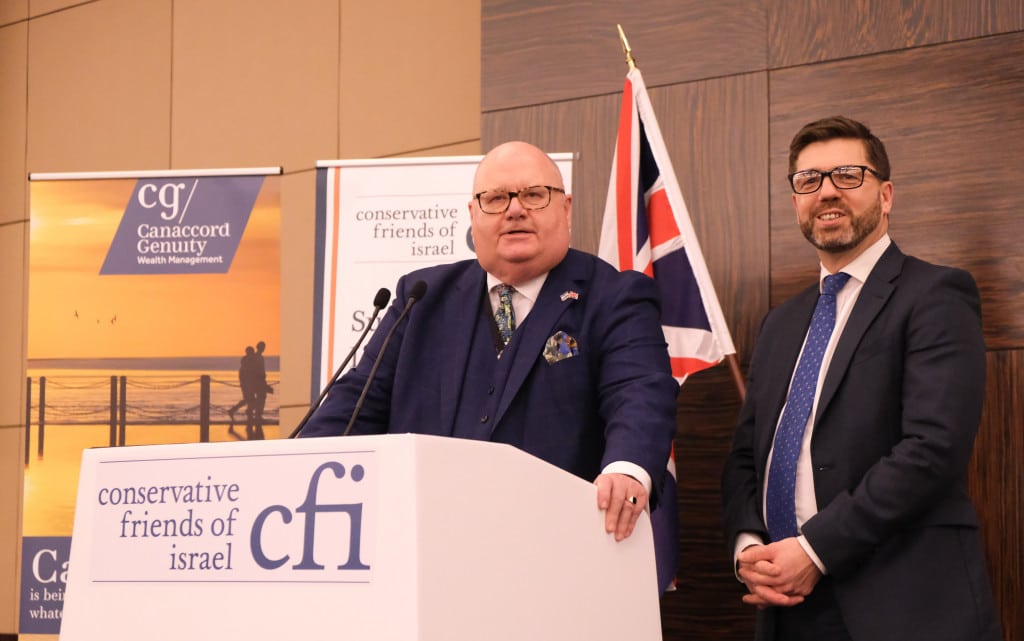 Thanking the Government, they said: “One thing that has remained constant is the steadfast support of this Conservative Government for the state of Israel”. The Parliamentary Chairmen highlighted that the government had proscribed Hezbollah and Hamas in full; put the UN Human Rights Council “on notice” to end its bias against Israel; delivered on the Conservative manifesto pledge to ban council boycotts of Israel; pulled out of the Durban conference; and consistently backed Israel’s right to self defence.

The two Parliamentary Chairs also thanked Foreign Secretary Liz Truss for her “very strong and clear commitment that Iran will never never have a nuclear weapon”, as well as record levels of trade.

We would like to thank the Metropolitan Police and the Community Security Trust for protecting guests at this high-security event. CFI thanks the Annual Business Lunch’s corporate sponsor Canaccord Genuity, and sponsors Sir Michael Heller and Mr Henry Davis MBE. 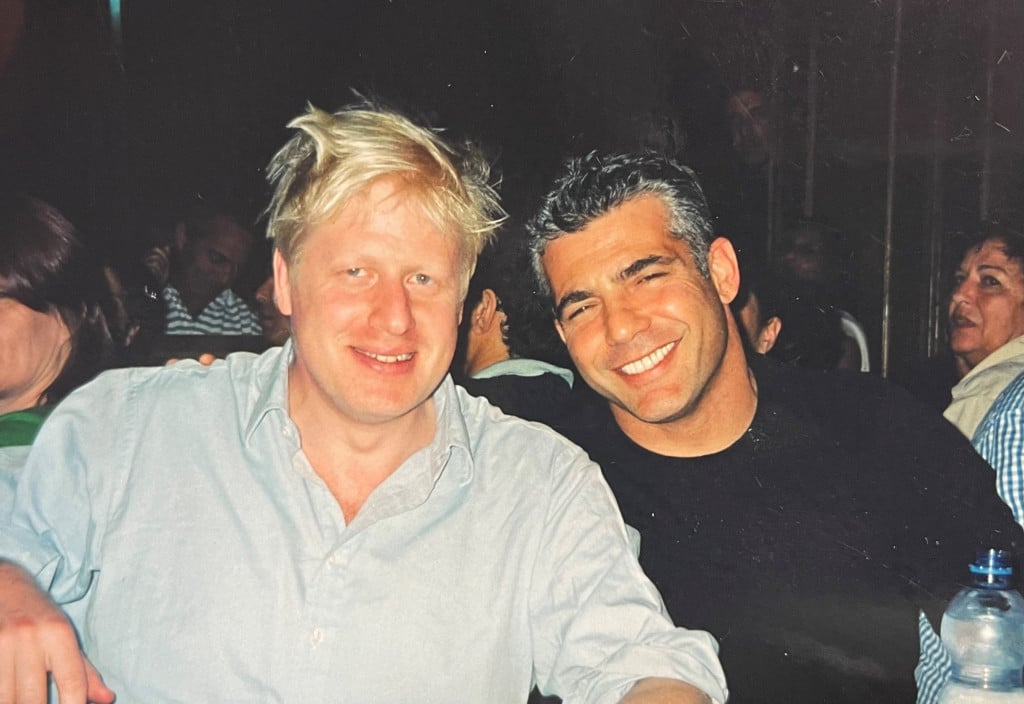