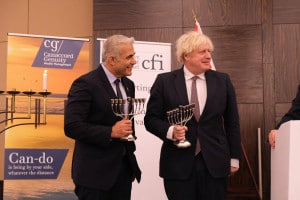 Mr Johnson congratulated Mr Lapid on his appointment as Israeli Prime Minister earlier this month, stating that he will “always be a big friend of both Israel and Prime Minister Lapid” and expressing confidence that the UK-Israel relationship will continue to be of “huge importance” to his successor.

The leaders agreed that “ongoing work”, including the recent announcement that the UK and Israel have begun trade negotiations, will take the cooperation between the countries “to new heights”.

During the conversation, both leaders underlined that Iran must be prevented from acquiring a nuclear weapon and underscored their support for the Ukrainian people.

Mr Lapid thanked Mr Johnson for his “ongoing efforts to support the UK-Israel relationship”, an international partnership that he said had made “enormous progress” during the Prime Minister’s tenure.