In a letter to CFI, Prime Minister Boris Johnson has confirmed the UK’s opposition to the International Criminal Court’s (ICC) controversial announcement of an investigation into alleged war crimes by Israel.

The Prime Minister writes: “We oppose the ICC’s investigation into war crimes in Palestine”. He adds that “we do not accept that the ICC has jurisdiction in this instance, given that Israel is not a party to the Statute of Rome and Palestine is not a sovereign state”.

“This investigation gives the impression of being a partial and prejudicial attack on a friend and ally of the UK’s”, the Prime Minister states.

The full letter can be found below.

CFI has raised concerns about this issue directly with Prime Minister Boris Johnson and Foreign Secretary Dominic Raab in meetings and letters, urging the UK to issue a public condemnation of the probe.

“We strongly welcome the Prime Minister’s confirmation of the UK’s opposition to the ICC’s controversial investigation. The investigation has rightly been condemned for giving ‘the impression of being a partial and prejudicial attack on a friend and ally’. As the Prime Minister states, the ICC does not have jurisdiction and we support the UK’s decision to stand with Israel against the probe”. 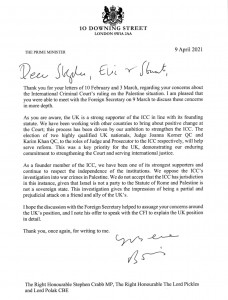