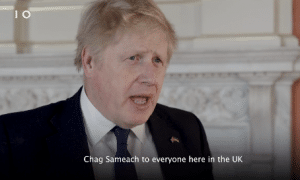 Prime Minister Boris Johnson has sent warm Passover wishes to British Jews and those celebrating around the world.

Mr Johnson welcomed that those celebrating can finally do so in person for the first time in several years and rejoiced that the “Seder table will once again be thronged with family and friends” and those partaking will not have to do so through “the unblinking eye of a phone camera or laptop”.

Observing that “a sense of community and togetherness are so important”, he said that a return to seeing loved ones in person helps make it even more “special”.

On a more sombre note, Mr Johnson brought attention to the Jewish community in Ukraine. Noting that thousands of Ukrainian Jews will be “huddled around candles in freezing basement bomb shelters”, he said that there are many Jewish refugees who have fled the country finding themselves alone in foreign lands, without their belongings, or certainty about the future – scenes which the Prime Minister called “horrifyingly familiar for generations of Jews”.

Mr Johnson optimistically noted: “The story of Passover is about a journey to freedom” and “faith in the midst of hardship”.