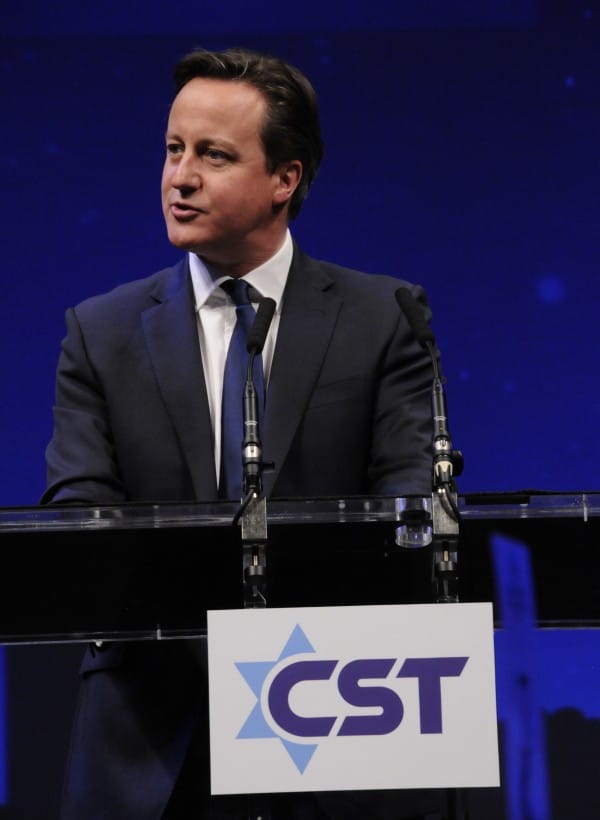 Prime Minister David Cameron pledged his support to Israel’s security and his determination to “beat anti-Semitism” during his keynote address to the Community Security Trust (CST) Annual Dinner yesterday.

Prime Minister David Cameron was loudly applauded as he announced a series of funding pledges in support of Jewish communal security across the UK, amounting to over £11 million.

The event, attended by over 1,300 guests, was one of the UK Jewish community’s largest ever charity events.

Click here to read a transcript of the full speech.

In a well-received speech that received a number of standing ovations, David Cameron said that Israel “will never be alone” and that with him “you will always have a British Prime Minister whose belief in Israel is unbreakable and whose commitment to Israel’s security will always be rock solid”.

Israel was heralded as “an extraordinary nation”, with the Prime Minister detailing the many security challenges the country faces, including Hamas, Hezbollah and “Iran looming nearby with nuclear ambitions”.

Reiterating his speech to the Knesset last year, Mr Cameron said he will “always stand up for the right of Israel to defend its citizens, a right enshrined in international law, in natural justice and fundamental morality”.

Mr Cameron also congratulated Prime Minister Benjamin Netanyahu on his re-election and said he would “look forward to working with the new Israeli government”.

The Prime Minister praised at length the Jewish community’s contribution to British society, emphasising: “For as long as I am Prime Minister, I will stand with you, work with you, celebrate what you do and ensure we do everything possible to keep you safe”.

The Prime Minister said that there was “no community in our country more proud of [British] freedoms and more proudly part of Britain than our Jewish community”.

Mr Cameron added: “It is a measure of the vigour of our institutions and the health of our democracy that the Jewish community feels safe to live and flourish here”.

Mr Cameron heralded CST volunteers as “not just the best of our Jewish community – but the best of Britain”, and thanked them for their work “on behalf of the whole country”.

The Prime Minister took a strong stance against anti-Semitism and Islamic extremism, vowing: “We are going to fight anti-Semitism with everything we have got. There will be no excuses. No exceptions. No justifications”.

Mr Cameron promised that he “will not turn a blind eye to the threats that the [Jewish] community faces”.

Expressing concern at the record levels of anti-Semitic incidents in the UK, Mr Cameron said that “if the Jewish community does not feel secure then our whole national fabric is diminished”.

The Prime Minister made a series of new funding announcements totalling £11.5 million for protection of Jewish community buildings, including synagogues and schools.

In making his announcements, the Prime Minister rhetorically asked: “How would we feel if we knew we could have done more? That’s not a thought I am prepared to entertain”.

Mr Cameron revealed that £10 million of new funding would go towards security “this year and every year – for as long as necessary”.

The funding commitments included £7 million of new money to fund guards for all Jewish private schools and colleges throughout the UK – an idea pushed by Mike Freer, MP for Finchley and Golders Green.

A further £3 million of funding will go towards protecting Jewish community buildings, including synagogues, which have been identified by the All-Party Parliamentary Group against anti-Semitism as potentially vulnerable.

An additional £1.5 million has been announced to help fund a new CST ‘Mission Control Centre’, which will include “closed-circuit television command and control and the ability to respond rapidly to those who need their help right across our Jewish communities”.

The Conservative-led Government already provides £2 million a year for security at Jewish state schools, with the Prime Minister observing that this was “something that has been championed brilliantly by Matthew Offord MP”.

The government is giving a further £50 million to the new UK Holocaust Memorial Foundation which was established as part of the Prime Minister’s recent Holocaust Commission, and is currently conducting the biggest audit of survivor testimony in British history.

Mr Cameron emphasised that “it is right that the stories of these incredible survivors, incredible Jews, incredible Britons should be recorded and preserved…so that the lessons of the Holocaust can be learnt by young people in every part of this country for generations to come”.

In a far-ranging speech, the Prime Minister also strongly condemned Islamic extremism and pledged to tackle the problem.

Describing Islamic extremism as a “poisonous ideology that perverts the Islamic faith in an attempt to justify the most sickening barbarism and brutality”, Mr Cameron stressed the need to “take on and defeat” this phenomenon.

Mr Cameron described the actions his Government has taken to tackle ‘so called non-violent extremism’, including banning record numbers of hate preachers, removing 75,000+ pieces of extremist material on the internet since 2010 and stopping the funding of organisations that promote extremism.

The Prime Minister was unequivocal: “We are a tolerant country – but if you preach terror you are not welcome here”.