Prime Minister Theresa May has celebrated the UK-Israel relationship, emphasising that “the UK is proud to stand side by side with Israel as an ally with mutual interests, and a close friend with shared values”, in CFI’s new edition of Informed magazine.

Prime Minister May describes 2018 as a “special year for all of us who count ourselves as friends of Israel”, adding that “it has had a particular meaning for us here in the UK, where we are proud of our role in helping to create a homeland for the Jewish people”.

The Prime Minister says: “Seventy years on from the establishment of the State of Israel, the Israeli people can be extremely proud of all that their country has achieved”.

In her letter, Prime Minister May says: “I am pleased that the relationship between the UK and Israel continues to go from strength to strength. Nothing demonstrated that better than the historic visit of His Royal Highness the Duke of Cambridge earlier this year, in what was the first ever official Royal visit to Israel”.

Hailing the UK-Israel partnership and her ambition to bolster bilateral ties after Brexit, Prime Minister May underlines: “Business and trade between our two countries are at record levels, and we enjoy close links in education, science, culture and the arts. As the UK looks to embrace the opportunities that will exist after Brexit, I want to strengthen our trading relationship with old friends like Israel even further”.

Referring to CFI’s trade-focused parliamentary delegation to Israel in May 2018, Prime Minister May adds: “That’s why I am so pleased that this year CFI conducted its first ever trade delegation to Israel, so that Conservative parliamentarians could explore for themselves the opportunities that exist for us to deepen our trading links with the ‘Start-Up Nation’”.

She vows that as Prime Minister, “I will always support Israel’s right to defend itself, and the Government will continue to work towards a two-state solution with a safe and secure Israel living alongside a viable and sovereign Palestinian state”.

Prime Minister May thanks CFI for its work: “I am grateful for everything that Conservative Friends of Israel are doing to promote that friendship. Thank you for your steadfast support for the Conservative Party, and best wishes for the year ahead”.

CFI’s Informed magazine has been published ahead of Conservative Party Conference and will be available to collect at our stand P1 in the Party Zone, as well as at our event on Tuesday 2nd October at 21:30, Hall 8, Birmingham ICC.

The new edition of CFI’s Informed Magazine is available to read on our website. 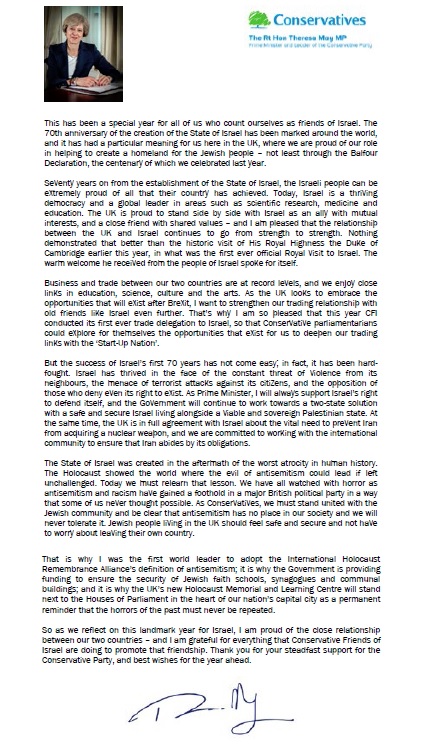