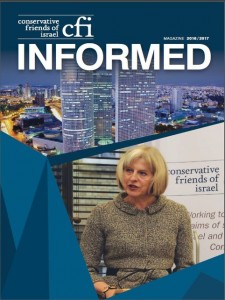 Prime Minister Theresa May has praised the UK’s relationship with Israel for being “as strong as ever” and declared her “long-time support” for CFI, in a letter published in CFI’s new edition of Informed magazine.

In her first words as Prime Minister in support of Israel and the UK’s Jewish community, Theresa May has heralded the strong relationship between the countries, pointing to bilateral trade, scientific research, security cooperation and shared values.

In light of the Palestinian Authority’s threat to sue the UK over the Balfour Declaration, Prime Minister May confirmed that Britain “will soon be marking a century since Foreign Secretary Arthur James Balfour, a Conservative, confirmed the UK’s support for the establishment of a national home for the Jewish people”.

Pointing to terror groups Hamas and Hezbollah, the Prime Minister states that the “dangers that confront Israel remain considerable”, and pledges that the UK “must do everything we can to ensure [Israel’s] citizens feel safe and secure in their own country”. She also reaffirms the British Government’s long-held position that “Israel has the right to defend itself”.

Reflecting on her first visit to Israel as Home Secretary in 2014, the Prime Minister recalls that she was “reminded of the deadly threats the people of Israel face every day, with the terrible news that the bodies of three missing Israeli teenagers had been found”.

The Prime Minister makes a determined pledge to “stamp out injustices”, including anti-Semitism in the UK and boycotts of Israeli goods and events. She also expresses her pride in working with the Chief Rabbi and cross-party UK Holocaust Memorial Foundation to “deliver our commitment” to a new National Holocaust Memorial and associated Learning Centre.

In closing, the PM asserts that “Britain would not be Britain without its Jews” and wishes the community “Shanah Tovah (Happy New Year)” and a “happy, healthy and peaceful year ahead”.

CFI’s annual Informed magazine has been published ahead of Conservative Party Conference and on the eve of a CFI Delegation to Israel for eight Conservative parliamentarians, led by former Secretary of State for Culture, Media and Sport, Rt. Hon. John Whittingdale OBE MP.